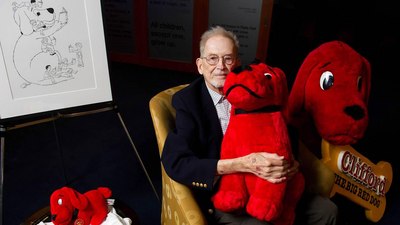 Norman Bridwell, the author/illustrator of the Clifford the Big Red Dog series of children’s books, died on Martha’s Vineyard on Friday, December 12, 2014. Bridwell created the character of Clifford in 1963 and went on to write and illustrate more than 150 titles, all published by Scholastic, that now boast 129 million books in print in 13languages. In 2000, everyone’s favorite BIG red dog made his television debut on PBS Kids and the animated series quickly became one of the network’s biggest children’s hits.

“Norman Bridwell’s books about Clifford, childhood’s most loveable dog, could only have been written by a gentle man with a great sense of humor,” said Dick Robinson, Chairman, President and CEO, Scholastic, the global children’s publishing, education and media company. “Norman personified the values that we as parents and educators hope to communicate to our children -- kindness, compassion, helpfulness, gratitude – through the Clifford stories which have been loved for more than fifty years.”

“The magic of the character and stories Norman created with Clifford is that children can see themselves in this big dog who tries very hard to be good, but is somewhat clumsy and always bumping into things and making mistakes. What comforts the reader is that Clifford is always forgiven by Emily Elizabeth, who loves him unconditionally,” Robinson added. “At Scholastic, we are deeply saddened by the loss of our loyal and talented friend whose drawings and stories have inspired all of us and generations of children and their parents.”

Born in Kokomo, Indiana in 1928, Bridwell grew up loving to draw. He studied at the John Herron Art Institute in Indianapolis and then moved to New York, where he took classes at Cooper Union for two years. Despite his passion for drawing, Bridwell struggled to enter the publishing world. His Clifford manuscript was turned down by nine publishers before landing at Scholastic, where Bridwell found a publishing home and remained for more than 50 years.

Clifford was originally to be called “Tiny,” but Bridwell’s wife of 56 years, Norma, instead suggested he be named “Clifford” after her childhood imaginary friend. The character Emily Elizabeth from the series is named after Norman and Norma Bridwell’s daughter Emily Elizabeth. For most of their life together, Norman and Norma Bridwell lived on Martha’s Vineyard, which some might say bears a rather striking resemblance to the “Birdwell Island” home of Clifford the Big Red Dog.

Norman Bridwell is survived by his wife, Norma, their daughter, Emily Elizabeth, son, Timothy, and three grandchildren. Before his death, Bridwell had completed two more Clifford books which will be released in 2015: Clifford Goes to Kindergarten in May and Clifford Celebrates Hanukkah in October.

A 50th anniversary video about Norman Bridwell and Clifford the Big Red Dog, including an interview with Bridwell, can be viewed in the player below: