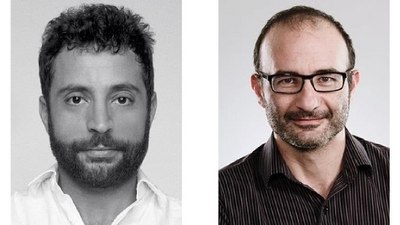 NEW YORK -- Click 3X has announced that it has added accomplished directors, Juan Delcan and Tyler Greco to Click 3X Films, its live action division, a move that signifies the company’s commitment to building a robust roster.

Delcan and Greco are already in full swing; Greco recently worked on a project for Tumi that includes three films combined into one two-minute piece that showcases 40 years of Tumi’s innovation, design and craftsmanship. Delcan is shooting work for HP, set to launch later this year.

“Both Juan and Tyler are unique talents and a natural, complementary fit to our evolving roster. We look forward to supporting each of them in creating stand-out content for our clients,” said Michael Flexner, Executive Producer, Click 3X.

Delcan has worked across numerous live-action and animated projects for beauty, fashion and luxury brands. Throughout his twenty years in the business he has worked successively as a designer, illustrator, video game creator, creative director, live-action filmmaker, and director of animation and motion graphics. His work has been honored by Cannes, New York Festivals, Siggraph, London International Awards, AIGA, PromaxBDA, Telly Awards, International Monitor Awards, and continues to be featured at numerous film festivals.

Prior to Click 3X, Greco helmed spots for Fortune 500 clients including AT&T, Fiat, Toyota, Nestlé, and the NFL, to name a few. He has also written and directed numerous award-winning campaigns with talents like T.I., Jessica Simpson, Terrell Owens, Fergie, Swizz Beatz, Fall Out Boy, and Michael Strahan for MTV networks.

“We’re thrilled to be part of a team that’s pushing the boundaries of storytelling and creativity through new technologies. At Click 3X, we’re able to put an emphasis on new ideas which makes for an exciting environment,” said Delcan and Greco.

On the heels of this news, Click 3X has also announced that Roxanneanco will represent the company for live action, design, animation and post across the East Coast. It will focus on expanding Click 3X’s relationships and showcasing its innovative and robust capabilities in live action, visual effects, post-production, 360° VR and interactive video to a wide range of potential clients in the advertising space.

“As we explore new avenues and business opportunities, we’re so excited to be partnering with a group of creative problem solvers that have a proven track record of working in this space,” said Flexner. “They have a stellar reputation in the industry and will be a critical partner to our team.”

Roxanneandco represents designers, directors, editors, music composers, and VFX specialists delivering solutions in branding, strategy and new business. Its Founder and President, Roxanne Artesona, is an advertising industry veteran with over twenty years of experience in the space.

"Click 3X has impressively thrived in an unpredictable and ever-changing industry. With its dedication to innovation and ability to stay ahead of new technologies and trends, we’ll make the perfect team, connecting Click 3X to companies ready to embrace this forward thinking mindset,” said Artesona.