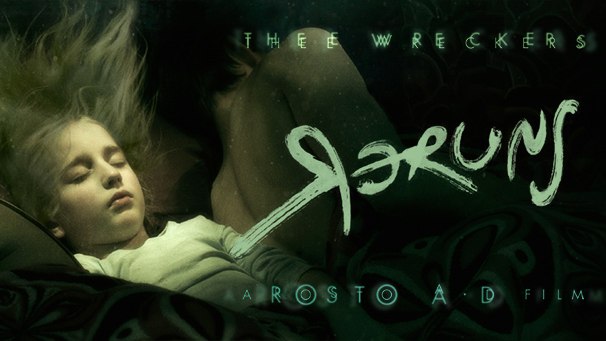 AMSTERDAM -- Animator Rosto will be a special guest at the prestigious Clermont-Ferrand International Short Film Festival, where his new film Reruns will premiere.

The imaginative short is the fourth and final in a series of musical films featuring the band Thee Wreckers. Alongside Reruns, the festival presents a special program including the entire Thee Wreckers Tetralogy, plus a new documentary about the films and music.

Reruns descends beneath the waves to enter a subterranean dream city. “The film plays with the idea that we always try to make sense of our dreams and memories,” Rosto says. “This is the most autobiographical film of the tetralogy. We follow me as a little boy visiting my old school and my grandmother’s house. We see my character growing up, until he is so old that he is actually dead. It is a film about my past and future.’

Although Rosto links characters and stories in all his work, music is what really connects his projects. “Music has always been a driving force in my work,” he says. ‘It all began with a series of rock 'n' roll songs that I wrote since 1995. The entire tetralogy is based on four Thee Wreckers songs. The films show what the music looks like.’

Reruns completes the tetralogy, consisting of No Place Like Home (2008), Lonely Bones (2013), Splintertime (2015) and Reruns (2018). Each film has a different storyline, but they are all connected and come from the same source. “It is great the Clermont festival shows the entire tetralogy,” Rosto says. “The four films are satellites around the online graphic novel Mind My Gap. I am currently developing the script for a feature named Mind My Gap.”

Another world première at Clermont ISFF, which runs Feb. 2-10 is the short behind-the-scenes documentary Everything’s Different, Nothing Has Changed (20 mins.) from Rob Gradisen and Joao Costa. The documentary covers 25 years of Rosto’s musical journeys and provides us with fresh insights into why it took 10 years to complete the tetralogy.

“Many people believe animation is totally computer driven, making it easier to create a film,” Rosto says. “But my films are hybrid, with many more techniques involved. Reruns is again a painstaking crossover of live action, animation and music. I use actors, dancers and acrobats. We actually rebuilt my grandmother’s room using real life Super-8 footage and modern technology. It couldn’t be more complex and that’s why my productions always take up a lot of time.”

Rosto is a special guest at Clermont-Ferrand, a festival that has supported him throughout his career. “Being a special guest and having special program for the entire tetralogy as well as an accompanying documentary about the films and the music and the band -- that feels fantastic because Clermont is so important and so cool,” he says. “It is a huge honor that they always keep a special spot for me.”

The annual Clermont-Ferrand International Short Film Festival is the world's leading film festival dedicated to short films. It attracts more than 100,000 attendees annually. Rosto was a juror and designer of the festival in 2007, and his film The Monster of Nix received the award for Best Original Film Score in 2012.