Claymation Pioneer Will Vinton Dies at 70

Famed Oscar and Emmy-winning director, who created memorable California Raisins characters before being dismissed from studio that bore his name, passes away after long battle with multiple myeloma. 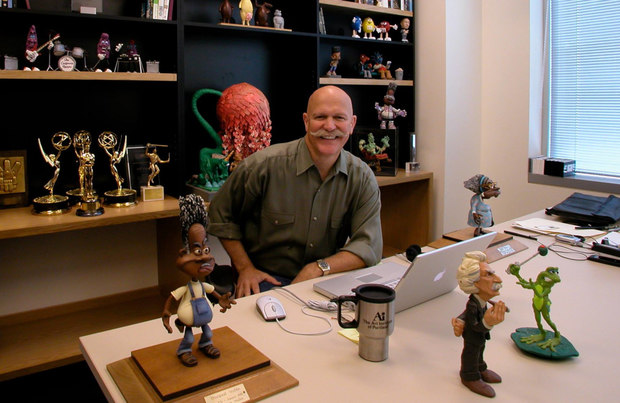 Will Vinton, founder of Portland’s Will Vinton Studios, famous for his wonderful moustache as well as his “Claymation” stop-motion animation technique used on memorable commercial campaigns featuring the California Raisins and Domino’s Pizza Noid, passed away yesterday at age 70 after a 12-year battle with multiple myeloma, according to a family Facebook post.

After studying physics and filmmaking at U.C. Berkeley in the 1960s, Vinton and clay animator Bob Gardner moved north to Portland, Oregon, setting up a basement studio where they spent the early 70s perfecting their stop-motion technique. In 1973, after producing a 1-1/2 minute short, Wobbly Wino, the pair began work on an 8-minute short about a stumbling wino interacting with paintings and sculptures at a museum. The film, Closed Mondays, went on to win the Oscar for best animated short in 1975.

After parting ways with Gardner, Vinton expanded his operations, eventually forming Will Vinton Studios. The studio’s vast body of work spanned the gamut of animated entertainment, from commercials to short films, TV shows and specials as well as feature films. He is best known for his stop-motion animation technique, dubbed “Claymation,” used on hundreds of projects including a wildly successful series of ads for the California Raisin Advisory Board – singing “I Heard it Through the Grapevine,” the California Raisins became so popular they went on to star in two TV specials for CBS, putting Will Vinton Studios firmly on the map as a world-renown animation studio.

Though Vinton continued producing stop-motion projects such as the holiday TV specials A Claymation Christmas Celebration, A Claymation Easter, and Claymation Comedy of Horrors, by the early 1990s he also embraced the growing medium of CG animation, producing the immensely popular “Red and Yellow” M&M spots exclusively for the Mars candy maker for over a decade.

In the late 90s, after being brought in to animate Eddie Murphy’s TV series, The PJs, Vinton found the Claymation process took too long and was not practical given the weekly show schedule. Ever the innovator, Vinton pioneered a new technique, “Foamation,” in which puppet armatures were covered in foam latex, making the characters more durable and easier to pose than clay. Ultimately, 44 episodes were produced over three seasons – the show won three Emmys and an Annie Award. At his studio’s 2001 peak, Vinton employed hundreds. However, after the cancelation that year of both The PJs after three seasons and Gary and Mike after only one, followed by the September 11 terrorist attack that resulted in large cutbacks in the advertising business, an over-extended Vinton Studio suffered huge losses and massive layoffs. Nike founder Phil Knight, a previous investor, once again put in money, this time securing a controlling interest as well as a place in studio management for his son, Travis Knight, who had been working at the studio as a stop-motion animator.

Disagreements ensued over the company’s strategic direction. Eventually, Vinton was forced out of the studio that bore his name. In a June 10, 2003 public statement, Vinton announced his ouster:

"After many great years building Will Vinton Prods. and creating groundbreaking Claymation and 3D-animated films, television and commercials, and growing Will Vinton Studios, I have been forced out of active involvement with the company by Phil Knight and his associates. The situation could also be described as 'Machiavellian!' And I expect you'll hear much more about this David and Goliath story in the near future.

As I told the remaining staff when I let them know I was fired, it's been one amazing 27-year run! When I think back on the highlights of my career I'm astounded at some of the great things we did together but the best part of it all was working collaboratively with some of the best people and talent anywhere, inside and outside the Studio! That has been my greatest pleasure thus far!"

Vinton ultimately sued to retain the rights to his name – in 2005, Vinton Studios was absorbed into the newly formed LAIKA, which under Travis Knight’s leadership has gone on to produce a number of acclaimed stop-motion/CG films such as Coraline, ParaNorman and Kubo and the Two Strings. Vinton continued to work for a number of years, founding Will Vinton’s Freewill Entertainment before retiring in 2008.

Shortly after leaving Vinton Studios, Vinton told AWN, "I'm definitely on my way back from hell." He claimed he was much happier, having signed with Creative Artists Agency and beginning to shop a number of animated projects, including a feature film, The Quest, written by Peter Crabbe.

He is survived by his wife, daughter and two sons. A celebration of his life will take place at Portland’s No Vacancy Lounge from 3:00 on Sunday October 21.