Claude Barras’s ‘My Life As a Courgette’ Opening Fantoche 2016 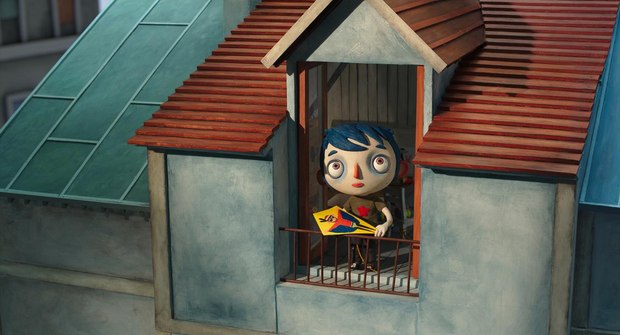 Fantoche, one of the world’s leading festivals for animated films and Switzerland’s largest and most prestigious cultural event devoted exclusively to animation in all its many thematic and technical facets, kicks off its 2016 edition September 6 and runs through September 11.

The 14th International Animation Film Festival Baden opens with the Swiss premiere of Claude Barras’s first feature-length film, My Life as a Courgette (Ma vie de Courgette), with the director and other crew members in attendance. A favorite of audiences and critics alike, the film has now been submitted for the Academy Award for Best Foreign-Language Film by the Swiss Federal Office of Culture. Another big highlight will be the premiere of the latest LAIKA production, Kubo and the Two Strings. Both feature films will later be released in Swiss cinemas; but you can only get a look behind the scenes at Fantoche’s exclusive making-of presentations. Twelve other feature films from France, Norway, the Netherlands, Spain, the Czech Republic, Japan, Korea, Canada and the U.S. will also be premiered, offering an impressive spectrum of animation today.

Kubo’s story is set in a seaside village in ancient Japan. The kind-hearted boy named Kubo (voiced by Art Parkinson, aka Rickon Stark from Game of Thrones) cares for his widowed mother and leads a modest existence as an origami storyteller. Kubo’s peaceful life is turned upside down, however, when he accidentally summons a spirit from his past that storms down from the heavens to re-ignite an age-old vendetta. Chaos ensues, and Kubo must flee. He joins forces with his new companions: with Monkey (Charlize Theron) and Beetle (Matthew McConaughey), he intrepidly embarks on a dangerous journey to save his family and solve the mystery of his fallen father, a legendary Samurai warrior.

Kubo and the Two Strings is a family-friendly story that takes viewers, big and small, on a journey to a fantastic world full of eerie creatures and bold adventure. The film was produced by the acclaimed animation studio LAIKA, which has already gained recognition with Coraline, ParaNorman and The BoxTrolls. Two years ago, Mark Shapiro of the LAIKA studio treated festivalgoers to an impressive making-of. Shapiro brings fascinating materials from his studio in Portland to the stage, demonstrating the skilled craftsmanship, love for detail and technical ingenuity that shaped the 300,000 photographs which make up this stop-motion film.

Ma Vie de Courgette is a Swiss-French co-production created using a similar technique. Claude Barras, the director of the film, will be attending Fantoche and discuss the production of his successful début film. He will be accompanied by Elie Chappuis (animation) and Gregory Beaussart, who was in charge of the puppet production. The festival offers unique first-hand insights into the conceptual, technical and artistic background of the film.

Other directors of feature-length films, such as Jan Bultheel with his award-winning début, Cafard, will also be attending the event to present their work. Innovative animation technology, social criticism or light entertainment -- Fantoche illustrates the impressive spectrum of current international productions in animated feature film. Detailed information and trailers for the films are available from the program overview section of the Fantoche website.

Details on the Latest Feature-Length Films with Making-Ofs

This new animated film from LAIKA jumps head-first into a fantastic world brought to life with magical stop-motion imagery. Besides its U.S. theatrical release on August 19, 2016, the film has only been screened at one festival worldwide thus far. Fantoche is looking forward to premièring this work in the German-speaking world.

With tickets to his presentation selling out in no time, Mark Shapiro of LAIKA studio was in great demand at Fantoche 2014. Which makes us all the more excited to have him back in Baden again in 2016. He will demonstrate how 300,000 images form a stop-motion film -- a process involving passion, craftsmanship, intuition and fantasy.

The audience favorite and winner of the grand prize of this year’s Annecy Festival will be opening Fantoche 2016 as a Swiss début. Courgette loves flying kites -- it is the only memory he has of his father. After a tragic accident of his alcoholic mother, a friendly policeman brings him to a children’s home. He finds it difficult in his new surroundings -- at least until a new orphan child arrives to rejuvenate both of their worlds. The film was an audience favorite at Annecy International Animation Film Festival. Barras fell in love with Gilles Paris’ book. Story and tone brought him back to his childhood and first emotional flutters in the cinema. “This adaptation into animation is an homage to neglected and mistreated children who do the best they can to survive and live with their wounds.”

This is a headstrong, fierce tale about a strong-willed orphan scholar and his master, a quick-tempered beast. Together, these two outsiders have to hold their own in the animal city of Jutengai through a combination of physical strength and their strong friendship. The Boy and the Beast was one of 15 candidates for an Oscar nomination and has scored various international prizes. The film won the grand prize at the Holland Animation Film Festival and will be celebrating its Swiss première at Fantoche. A deftly told, tragic story about a world wrestling champion who fought on the Yser Front as a volunteer during World War One as experienced through the stripped-down aesthetic of a computer game, albeit one with a difference: rather than fighting against monsters, the protagonist has to face real-world violence and human cruelty. Bultheel seeks artistic challenge. He rejects the use of storyboards, uses motion capture technology and simultaneous voice recording in a style of low-poly models and simple textures. “We combine the emotional impact of real dramatic actors as in a fiction film with the imaginative and artistic qualities of an animation film, fueled by fast and efficient technology coming from the game industry. The best of all three worlds!”

Other Feature-Length Films at Fantoche, Arranged By Age Category

Feature-length films for the whole family

Forty years after their first appearance on Czech television, the two resilient handymen dressed in yellow (Pat) and red (Mat) jumpers provide a wonderful evening of entertainment: over the course of ten episodes, Pat and Mat give their creative, anarchic ideas free reign and turn both home and garden upside down. Two rival villages, three friends and a cheese-race are at the heart of this adventurous animated film. The ambitious bird Louis, the timid hedgehog Luca and the friendly inventor Reodor have to show an iron will and the spirit of solidarity in order not to lose their homes to their adversaries. This film reaped a great deal of applause at Biennale, and its Swiss première will take place at Fantoche. Michael Dudok de Wit has already captivated the world with a series of empathic short films and is now presenting his feature film début at Fantoche. A castaway tries in vain to leave a desert island and encounters a red giant tortoise along the way. This story tackles the forces of nature, the will to survive and the power of love. Fantoche will be screening this film for children and adults for the first time in German-speaking Switzerland, which opened Annecy and was received with great enthusiasm in Cannes. Feature-length films for youths and adults

On an island in the middle of the ocean after the ecological apocalypse, the sensitive orphan Birdboy seeks his salvation in drugs while his girlfriend Dinky wants to escape the island. Psiconautas, voted best film at the international Stuttgart Festival of Animated Film 2016, explores the psyche of a lost generation with powerful, sombre images. Fantoche will be celebrating the Swiss début of this work.

Poetry is love, poetry is life. The introverted young Canadian poet Rosie Ming is trying to find herself and her voice. She longs to visit Paris, but travels to Iran -- once there, she is confronted by her past. A poor miller sells his beautiful daughter to the devil. Being pure of soul, she manages to escape the devil, but loses her hands to him -- this is the barbarous start to a little-known Grimm fairytale. Laudenbach’s award-winning feature film début will be sure to astound audiences with its visual language, which is inspired by calligraphy. Fantoche will be screening the film, which received a special mention by the jury in Annecy, as a Swiss première. Starting in the 1920s, John R. Brinkley quickly became famous for treating impotent men with goat testicle transplants. Using archive material and animated scenes, Penny Lane creates a documentary about the pseudo- doctor. The tale of adventure and pioneering feats quickly spirals out of control, leading to an unexpected end. Penny Lane received a Special Jury Prize for Editing at the prestigious Sundance Festival for this unique collage. A terrifying zombie epidemic erupts in the center of South Korea. In the midst of the chaos, Suk-gyu tries to find his missing daughter. In his third feature-length film, director Sang-ho Yeon (The King of Pigs) points poison arrows at the social injustice in his country. His work already impressed the jury and audiences in Annecy and at the Neuchâtel International Fantastic Film Festival. John and Elliott have had enough: it’s their turn to be famous. They want to be the digital heroes who light up screens around the world. And they are willing to pay any price to get there… Nerdland is a scruffy, humorous deconstruction of today’s excessively restless world of attention and celebrity. Following Tribeca and Annecy, Nerdland will now have a chance to entertain the audience in Baden! Newport City, 2027: Motoko Kusanagi, Major of Sector 9, and her team have to solve the mysterious case of the assassination of the Japanese Prime Minister. The Swiss première of a sci-fi epic produced by Production I.G, which released the original cult classic Ghost in the Shell.