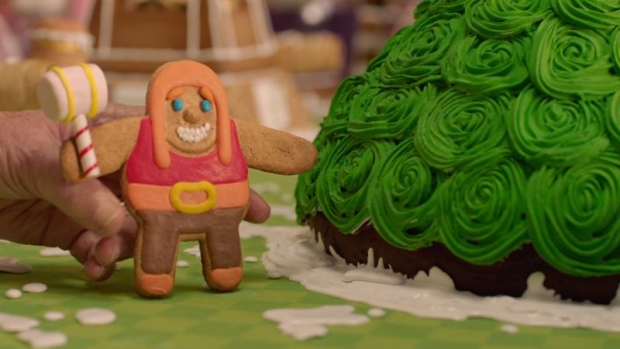 Leith sees her perfectly constructed gingerbread village, imagined, and designed by Gainsborough, destroyed by cakey Clash characters. Fan favorites, including the Barbarians, Hog Riders, and Wizards, cause absolute chaos from all angles, resulting in a slow-motion cake explosion, a Blinkink first. Hours of painstaking patience and intricacy went into the assembly of every cannon, barrack, and delicious looking skeleton.

“It was extremely fun to take the clash characters and tackle how we could bring them to life in the world of baking,” shared Gainsborough. “We developed as many visual gags as we could, drawing skeletons made of icing; goblins made of jelly; and pigs made of marshmallows. We then took these fun little ideas and stitched them together in a fast paced, escalating action sequence to try and create an over-the-top ride that was exciting to watch. The agency and client were trusting and open to collaboration - they let us enter their world and play around with the characters and put our spin on the film. I wanted to make a whacky and elaborate story while staying true to the game.”

“The project was extremely ambitious, however the whole crew worked amazingly hard to pull off the finished film,” he continued. “There was a lovely moment on the shoot where the art department and the camera crew were drilling into sugary sweets and poking L.E.D.S inside to create edible lights for the gingerbread town square. The whole crew came up with creative tricks like this every day to bring the film to life."