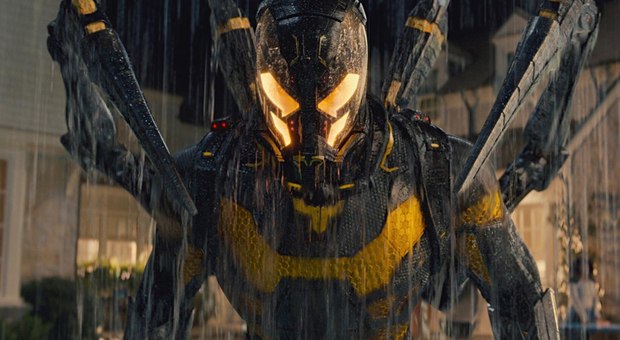 Cinesite delivered a major visual effects sequence for the Marvel Studios production featuring Ant-Man and his evil nemesis Yellow Jacket, creating Ant-Man’s helmet in CG and full-CG characters and effects. The fight sequence that begins with a brawl inside a suitcase, which falls from a helicopter to the ground. Landing in a swimming pool at a family barbecue, the characters grow to normal size, then shrink back down again as they duke it out in front of shocked bystanders.

One of the most challenging shots involved the creation of a fully-CG Yellow Jacket emerging from the water. Cinesite began with assets supplied by the production, developing them to completion of final shots, all of which were rendered using Solid Angle's Arnold. The surface of the suit has a honeycomb texture, which needed to be matched with shots by other vendors in the film. The bespoke shader was built in three stages. Masks were used to control the specular roughness along with an inverted facing ratio to get less reflection on the glancing angle on a random set of honey comb faces. When the three layers were combined a multi-faceted breakup effect was achieved.

Rivulets of water flow from Yellow Jacket’s suit, dripping from the surface as he exits the pool.  A custom microsolver was developed in Houdini SideFX, to ensure that water clung realistically to the suit surface.  The water elements were rendered in Mantra before being passed to the compositors.

From the swimming pool battle, Ant-Man forces Yellow Jacket inside the house, sending him smashing through a window as both characters shrink in size. They fly through shards of glass and wood in macro.  The glass and wood break up was achieved in Houdini using a Voronoi shatter set up with a custom distribution to give the glass a fractured layout.  There were rendering and simulation challenges from rendering macro shots containing glass shards with two characters, along with motion blur and depth of field.   Houdini’s Bullet solver was used to create the rigid body workflow, storing the simulation data as a point cloud.  This enabled the team to create many simulations for both the foreground shards and to populate the background.

Check out the VFX breakdown in the player below: