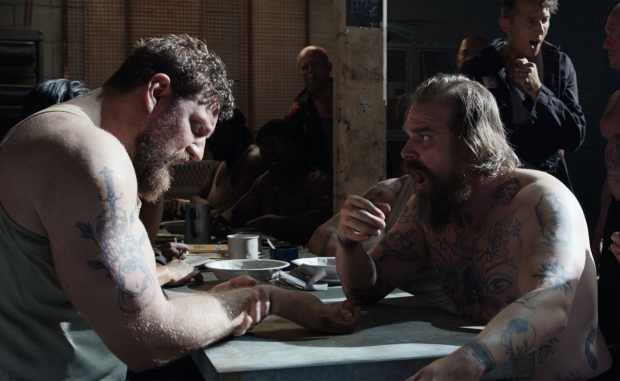 Black Widow explores the evolution of the eponymous character, also known as Natasha Romanoff.  Following the events of Captain America: Civil War (2016), Romanoff finds herself alone and forced to confront a dangerous conspiracy with ties to her past.  Pursued by a force that will stop at nothing to bring her down, she must deal with her history as a spy and the broken relationships left in her wake long before she became an Avenger.

In contrast with the other-worldly effects created for previous Avengers films, Cinesite’s work on the film was completely terrestrial, ranging from helicopters to cars, a laboratory and a prison. In one sequence, where Natasha and her sister Yelena are having a conversation while driving down a motorway, Cinesite’s team replaced their BMW with a CG version, stitching together 9 cameras forming a circular array to create a 360-degree environment.  This environment was projected behind the actresses on set to achieve appropriate interactive lighting and added into the shot later, complete with glass reflections on the car windows.  Another shot, filmed with a locked-off camera, was altered so that the car drives into the shot, adding dynamism and pace to the dialogue scene.  This was achieved through careful sleight of hand which involved adding the plate with the actresses into a separate car and positioning them within the CG vehicle and environment.

Much of Cinesite’s work takes place inside a squalid Russian prison, where Alexei (The Red Guardian) is languishing.  In one gruesome but hilarious sequence, Alexei is participating in an arm-wrestling contest in which he easily snaps the wrist of a particularly gargantuan opponent.  His arm hangs precariously at a very uncomfortable angle.  A CG hand and forearm were added, and 2D projection techniques used to blend seamlessly out of the live-action into the CG limb. One of Cinesite’s most challenging shots involves Alexei pulling one of the prison guards over a guard-desk, through a pane of toughened glass.  Cinesite VFX Supervisor Ben White says, “What made this shot a particular challenge is that it’s laminated glass, which behaves very differently from the regular type.  It’s like windshield glass – it’s tough, flexible and very difficult to break.  As it shatters it behaves more like a kind of rigid, glassy cloth; that was a challenge for the FX team, but they really pulled it off and it makes for a very convincing action shot.”

Cinesite partner company Trixter also delivered a significant body of work, which includes Taskmaster’s mask, Black Widow’s veil and several major action sequences and environments.  Last year, they delivered over 280 shots for Captain Marvel, including Marvel’s cat, Goose. More recently they delivered VFX for the Loki series on Disney+; they are currently in production on Shang-Chi and the Legend of the Ten Rings, scheduled for release in September 2021.