Cinesite Fills ‘The Witcher’ with Dangerous Monsters, Epic Battles and a Magical Fire 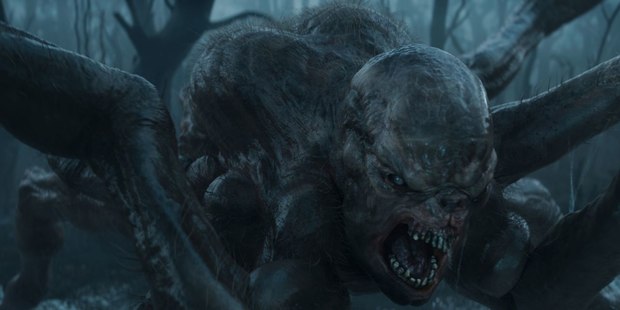 Based on Polish writer Andrzej Sapkowski’s book series of the same name, the Netflix show is set in a fictional medieval world on a landmass known as "the Continent.” It follows the story of solitary monster hunter Geralt of Rivia (Henry Cavill), sorceress Yennefer of Vengerberg (Anya Chalotra) and Cintran princess Ciri (Freya Allan), who find their destinies tied together.

Cinesite’s artists were tasked with creating the opening battle sequence of the first episode, where Geralt of Rivia fights a massive arachnoid known as the Kikimora in a dark swamp. First, the team conducted research into the movement of real-life insects to create the eight-legged creature’s realistic and coordinated style of movement that needed to be dangerous but precise. They carefully matched the Kikimora’s movement to the planned moves of the fight choreography, in order to create realistic interactions with Geralt. “Keeping the legs looking tidy, not covering Geralt, yet still functioning realistically in a fight scene was key,” Pejic explains. “Too much action and the viewer would just get lost in a frenzy of legs! The animators also had to take into account the Houdini water simulation. Moving a leg too quickly might cause an aesthetically unpleasing splash, so finding the right balance whilst still fully interacting with our hero was a complex task.”

Another early battle sequence filmed on a hillside outside Budapest required the creation of 10,000 Nilfgaardian soldiers fighting the Cintrans. 15-20 extras were filmed as reference and captured with 360-degree photogrammetry and motion-capture cycles, as infantry and on horses, with a range of armor and uniforms. This gave the team scale, lighting, texture and movement reference; they were later replaced with Cinesite’s crowd agents and CG horses.

The 3D team also created the Striga creature and golden dragon for the series. The horrifying Striga features in Episode 3, in another fight with Geralt. Cinesite’s artists researched a wide array of reference material for the thin, haggard, zombie-like creature, from horror films including The Grudge, Mama and some scenes from The Ring. “Striga needed to have an otherworldly feel but not be supernatural,” Pejic notes. “She had to conform to real world physics but at the same time she had to be able to interact with the environment in some unusual and interesting ways.”

The production built a prosthetic costume, which was worn by the stunt crew for most of the action shots. Cinesite’s team augmented and improved the prosthetics, but also recreated the creature entirely in CG for the more physically demanding shots, which needed to intercut seamlessly with the prosthetic version. Another sequence in the series’ climax involved the creation of a vicious fire, spread magically by Yennefer, engulfing a nearby forest. This effect was achieved by creating a CG forest and dividing it into sections, which were further subdivided into even smaller clusters. Burn simulations were run on each cluster incrementally, reducing the overall render time and allowing the fire to spread from cluster to cluster in a convincing (although magically accelerated) way.

Netflix has recently announced that a second season of The Witcher is coming in 2021. They also just announced that Studio Mir (The Legend of Korra, Voltron: Legendary Defender, Kipo and the Age of Wonderbeasts) has been developing a new Netflix Original anime feature spinoff, The Witcher: Nightmare of the Wolf, for the last year. The film, which, “explores a powerful new threat facing the Continent,” will be set in the same universe as the live-action series; the filmmaking team includes The Witcher producers Lauren Schmidt Hissrich and Beau DeMayo.