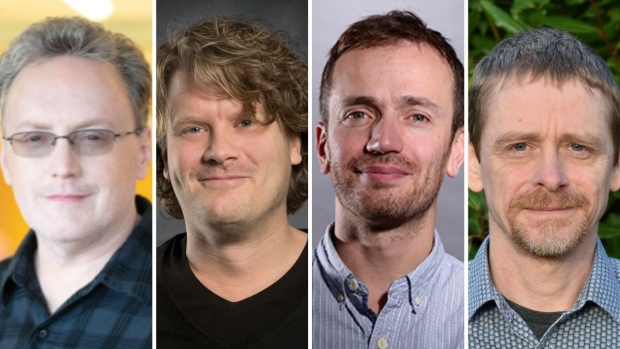 LONDON – Cinesite announced today that it has reshaped its production and technology leadership with one new appointment and several promotions.  Over the past five years Cinesite has emerged as one of the largest independent entertainment service studios in the world, expanding to include the Image Engine and Trixter brands. These latest changes reflect the company’s growing maturity and its endeavors to consolidate expertise across the group.

"I am very excited to welcome Hank [Driskill] to the Cinesite team and to announce the well-deserved promotions of Holger [Voss], Alexander [Savenko] and Danny [Smith], who have made major contributions to Cinesite over several years through their dedication, vision and teamwork.” commented Cinesite CTO, Michele Sciolette. “In recent years we have been working to integrate our studios to give our clients the ability to tap into integrated global capacity, technology, and talent anywhere in the world, while offering a high-quality local experience. As Cinesite continues to expand, we are eager to accelerate this effort and to take our VFX and feature animation global pipeline and infrastructure to the next level, consolidating our efforts across our studios, connecting as one company, and growing our global strategy together. This new group-focused leadership team will shape and implement our strategy in collaboration with the exceptional talent in each one of our studios.”

Hank Driskill joins Cinesite from Blue Sky Studios.  In his new role he will be responsible for leading the CG supervisors as well as shaping the workflow and working practices for Cinesite’s feature animation teams. Driskill has over three decades of experience, with over twenty years in senior technology positions. Prior to Blue Sky Studios, he spent 20 years at Walt Disney Animation Studios as part of the studio's leadership, serving as Technical Supervisor on films such as Bolt, Big Hero 6, and Moana.

Holger Voss is taking on the new role of Group Head of CG for Visual Effects, focusing on leading the VFX workflow and tailoring Cinesite’s pipeline to meet the needs of VFX production.  Emmy award-winner Voss has been a pivotal member of Cinesite’s team for 17 years; his technical knowledge is integral to Cinesite creating innovative, made to measure visual effects for every production it works on.

Danny Smith is a specialist in systems infrastructure technologies within the visual effects industry. He joined Cinesite in 1996 and has worked for the studio periodically for many years while co-owning an independent support business working for a wide range of TV and Film VFX houses. Smith returned to Cinesite in 2017 having previously been Head of Systems Technology at Cinesite London. In his new group wide position as Head of Infrastructure Technology, he will be responsible for spearheading a unified approach to core infrastructure design and deployment in VFX and feature animation divisions across the Cinesite Group. Smith will be providing technical leadership, supervision and mentoring to the senior technical members of the systems group and the systems development team. Prior to re-joining Cinesite, he was Head of Technical Operations at Framestore London.

Alexander Savenko moves into the new, expanded position Group Head of Production Technology. In this role he will be leading pipeline development strategies across the group.

Savenko began his VFX career with Cinesite as a talented young developer in 2003, having completed his doctorate in computer science at Moscow University the previous year. He went on to progress through the pipeline department working as a 3D technical director, a senior technical director before becoming Head of CG Pipeline. In 2013 he joined MPC as a Software Lead for Rendering, helping teams to deliver award-winning blockbusters like Jungle Book, Guardians of the Galaxy, and Maleficent. Savenko re-joined Cinesite in 2015 and has been a key player in software development and systems architecture across Cinesite’s expanding studio footprint.

Cinesite, Image Engine and  Trixter are currently in production on the Warner Bros. live-action features Fantastic Beasts 3, Space Jam: A New Legacy and The Suicide Squad, The Witcher S2 and a yet to be announced feature film for Netflix as well as The Addams Family 2 and Respect for MGM, The North Water for BBC Films, Blazing Samurai and Hitpig for Aniventure and Shang-Chi and the Legend of the Ten Rings for Marvel, to name a few.