Eighth annual benefit auction explores as a theme the great animator’s golden age -- films he made in the 1950s. 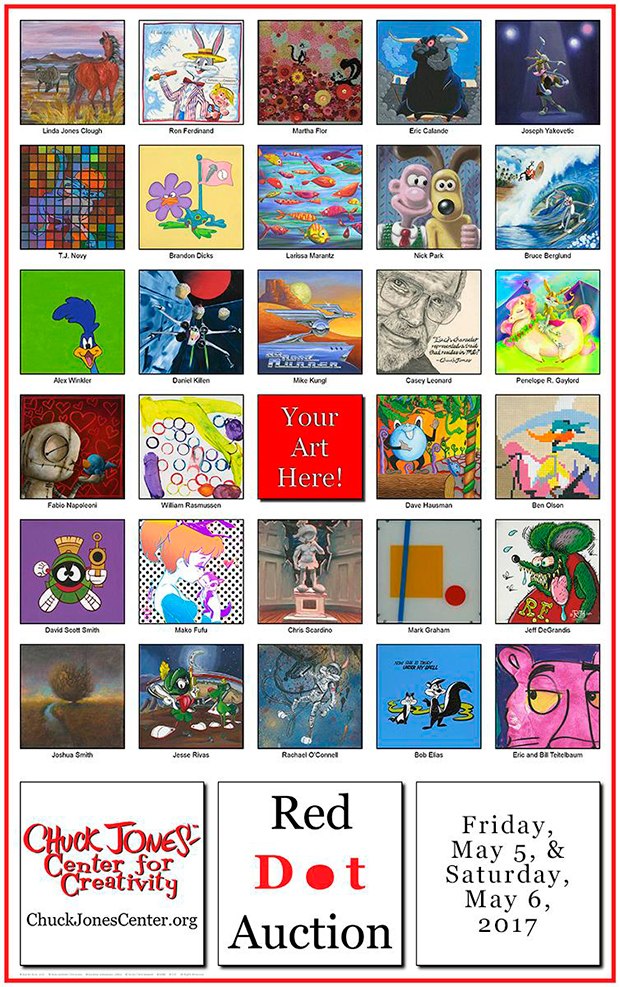 Thirty canvases will be chosen to represent to the Red Dot Auction on a commemorative poster, like this one done for the 2017 edition.

SAN DIEGO -- Preparations are underway for the eighth annual Red Dot Auction benefiting the Chuck Jones Center for Creativity, scheduled for May 11.

The center is asking supporters to donate a work of art to this year's Red Dot Auction. This year’s overall theme is changing from the Life & Times of Chuck Jones to his Golden Age Decade, the 1950s. Any of the over 90 cartoons Chuck Jones directed during the years 1950-1959 are fodder for the imagination. A list of the cartoons is available by clicking here.

There will be five categories this year:

There are only 30 spaces available in each of the five different sections, all requests for a specific section will be on a first-come, first-served basis. To submit your information and section request, click here.

The canvas provided for the first four sections will be 12 inches square and, as last year, the center asks artists to sign the artwork on the reverse. For the 3D object, please sign the bottom of the object.

New this year, artists may choose to work in any size canvas or other substrate they would like to provide themselves. Artists may prefer to work on paper or another substrate and that's fine, as long as we can mount it to the 12-inch square canvas for presentation the night of the event. The artwork should be signed on the reverse so that bidders at this silent auction will not know who has created which work of art.

To share a work of art for the auction, fill out the registration form here.

Also, a commemorative poster will be printed, featuring 30 canvases selected to represent this year's Red Dot Auction. Two of the posters will be produced and sold the evening of the event. To be considered for inclusion in the commemorative poster, artwork must arrive no later than March 15.