Originally shown at Burning Man 2014 and on display at SIGGRAPH 2015, ‘Shogyo Mujo’ is a 12-foot 3D projection-mapped skull displaying 30 different animations of temporal dimensional artwork that pulsate to music and can be changed using a touch interface. 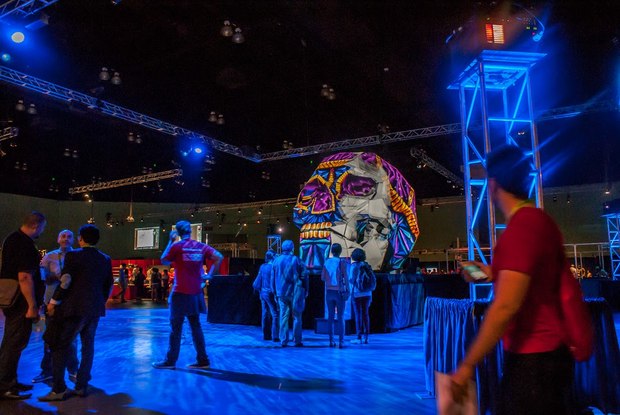 Visual and audio technology developer Christie was on full display at the 42nd International Conference and Exhibition on Computer Graphics and Interactive Techniques, held this year August 9-13 at the Los Angeles Convention Center.

Originally shown at Burning Man 2014, Shogyo Mujo is a 3D projection-mapped skull created in collaboration with artist Josh Harker and Theatrical Concepts. Shogyo Mujo represents the first of the three marks of the Dharma, stating that all things are impermanent, as represented in the changing projection mapping display onto the skull. Shogyo Mujo displays 30 different animations of temporal dimensional artwork on a giant skull sculpture. The graphics pulsate to music and can be changed using a touch interface.

Presented as a 360-degree display onto the 12-foot skull, the projection mapping is powered by four Christie Roadster HD20K-J projectors, each delivering 20,000 lumens of light in HD resolution with built in Christie Twist for seamless blending between the projectors.