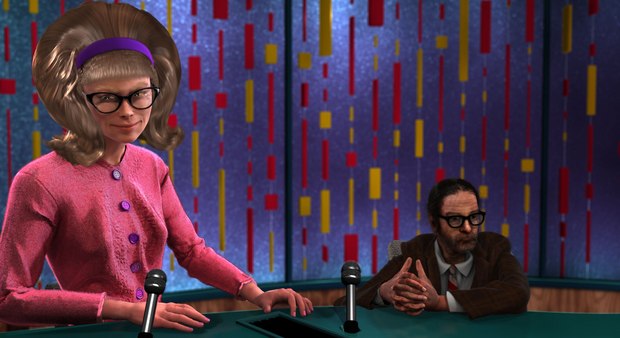 Montreal -- Chris Landreth’s award-winning National Film Board of Canada (NFB) animated short Subconscious Password has been selected to screen at the Sundance Film Festival as part of its Shorts Program 1. The film will have its Sundance premiere on Friday, January 17, starting at 6:45 p.m. at Broadway Centre Cinema 3 in Salt Lake City, with Chris Landreth in attendance.

It’s the latest honor for the 11-minute short, which garnered the prestigious Annecy Cristal award for best short film at its world premiere this past June at the Annecy International Animation Film Festival in France. The film is produced by the NFB, with the participation of the Animation Arts Centre of Seneca College and Copperheart Entertainment. Marcy Page (NFB) and Mark Smith are the producers.

Winner of the Academy Award for Best Animated Short Film for Ryan (2004), which was co-produced by Copperheart Entertainment and the NFB, Landreth takes audiences on a mind-bending romp through a game show of the unconscious in Subconscious Password when his alter ego, Charles, cannot remember a friend’s name at a party.

Subconscious Password combines dazzling computer animation with pixilation sequences featuring Landreth’s friend and fellow animator, John Dilworth. The computer animation was created with Autodesk Maya 3D animation software, designed with Landreth’s input and used on both of his previous NFB films. Opening title sequences were modelled and animated with SANDDE (Stereoscopic Animation Drawing Device), a digital animation technology created by IMAX Corporation that allows artists to create hand-drawn animation in 3D space, and which has been licensed to the NFB to develop new creative applications.

It’s Landreth’s first film in stereoscopic 3D (S3D), and his third with the NFB.