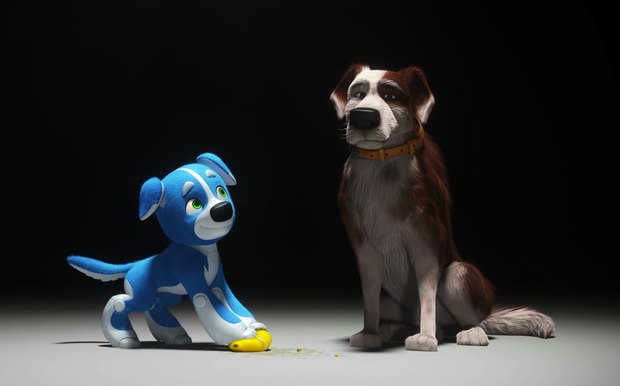 it was announced today by Marza’s CEO, Masanao Maeda.

Currently in pre-production with voiceover work set to start on February 1st, UK-based Timeless Films is handling international rights to the project, and will present it to buyers at next month’s European Film Market in Berlin.

Robodog is a classic, heart-warming adventure story about an unlikely duo who couldn't be more different. KC (Kinetic Canine) (Colfer) is a bright, energetic but overzealous robotic dog, while Marshall (Perlman) is an old, curmudgeonly "real" dog, set in his ways and has little patience for anything new.  This canine odd couple embarks on the adventure of a lifetime where each will learn the true nature of friendship, and not to judge a book by its cover.

“We are absolutely ecstatic that Chris has chosen Robodog as his first foray into animation. Coupled with Ron’s extraordinary voiceover work, the duo’s talent will make for great chemistry onscreen. Timeless Films is by far the perfect fit for the project due to their expertise in both producing and selling animated films overseas,” said Maeda.

“We are thrilled to be working with Marza and the production team on this wonderfully original film and look forward to presenting it to all of our international distribution partners in Berlin,” said Ralph Kamp, Chairman and CEO of Timeless Films.

"Chris and Ron are the perfect actors to play KC and Marshall as their voices exemplify the qualities of each character. Chris has an appealing, youthful voice which fits right in with our lead character, KC, who is above all a charismatic entertainer. Ron's voice demands authority, but also has a soft, vulnerable side which works very well for Marshall who comes across as a grouch, but is really a sensitive dog dealing with his past,” said Anderson.

"The kid in me is barely being contained right now. I'm so happy to get the chance to work on my first animated film with this wonderful team,” said Colfer.

Colfer won a Golden Globe and has been nominated for two Emmys and a Screen Actors Guild Award for his ongoing role as Kurt Hummel in Fox's popular TV series, "Glee." He also wrote and starred in Struck By Lightning, which was directed by Brian Dannelly, and also starred Allison Janney, Christina Hendricks and Dermot Mulroney. The film was released theatrically by Tribeca Film in 2013. Colfer is also an established author. His series of children's books began with "The Land of Stories: The Wishing Spell" which debuted at #1 on the New York Times Best Seller List in the summer of 2012. He voiced over 80 different characters for the audiobook version, and is currently working on the 3rd and 4th installments.

Perlman has done extensive voiceover work in feature animated films and television series including providing the voice for the Stabbington Brothers in Disney’s hugely successful Oscar nominated hit Tangled. He most recently lent his voice to 20th Century Fox’s Percy Jackson: Sea Of Monsters and can next be heard in The Book Of Life co-starring the voices of Channing Tatum, Zoe Saldana and Christina Applegate and produced by Guillermo del Toro, coming to theatres in October 2014. His other credits include Pacific Rim, Hell Boy and FX’s “Sons of Anarchy.”