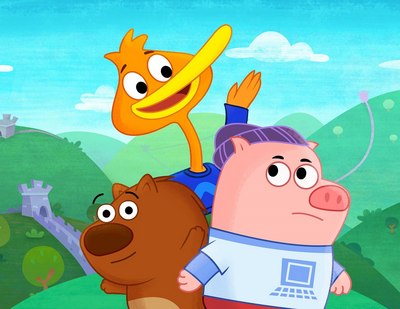 LOS ANGELES -- Leading kids’ Chinese Entertainment company, UYoung Culture & Media Co., Ltd., has announced the opening of a base in the U.S. to further its strategy of creating, developing, producing and distributing world-class brands that appeal to both Chinese and international markets. The new division of the company is UYoung Entertainment International, Inc. (“UEI”), and is based in Los Angeles. The first key undertaking for the US-based team will be making the company’s debut at 2016 Licensing Expo in Las Vegas, where it will launch its first international brand, the animated comedy pre-school series P. King Duckling.

UEI has also announced the appointment of Sander Schwartz and Elie Dekel as senior advisors to the company Schwartz and Dekel will support UYoung’s launch of P. King Duckling and advise the company on its international expansion plans and growth strategies. In addition, Schwartz will seek out future co-production and content distribution opportunities for UYoung, while Dekel will drive the branding and consumer products licensing strategies for the company.

Lisa Zhong, President of UYoung, commented, “We are thrilled to have both Sander and Elie on board to guide UYoung in its international endeavours. UYoung has its roots in China but is committed to working with the best talent from around the world to create first class animation content that appeals to global audiences. P. King Duckling is the first of many animated series which will demonstrate that commitment.”

Schwartz added, “These are very exciting times for UYoung and I am delighted to be coming on board to support UEI’s expansion into the international markets. The company has an extremely talented team working across high quality animated brands and content in China and the U.S. I am  looking forward to seeking out best-in-class international partners to work with us on new projects with global appeal”.

“UYoung is a powerful force in producing, distributing and licensing kids’ brands and content in China.  It’s a thrill to work with the talented team at UYoung as they continue to grow outside Asia.  Together, we are developing dynamic branding and licensing strategies for the company and look forward to the successful launch of P. King Duckling worldwide,” concluded Dekel.

Launched in 2000 and headquartered in Beijing, UYoung Culture & Media Co., Ltd. is China’s leading kids and family entertainment company. Focusing on kids up to 10 years-old, UYoung produces, distributes and licenses animated kids’ content across all platforms, including TV, film and online. In addition, UYoung also creates its own pre-school consumer products lines and runs strategic media operations across a number of Chinese kids’ channels.

Aimed at 2-7 year-olds, pre-school series P. King Duckling will premiere on Disney Junior in the U.S., Latin America, India, Korea and Southeast Asia later this year. The irreverent comedy follows the feathery adventures of an extremely intrepid, but slightly hapless, young duck and his two best friends, Chumpkins and Wombat. Together the friends embark on a series of hilarious adventures. Whether they are in their hometown of Hilly Hole or flying to the moon, the trio always find creative and imaginative ways to overcome the silly challenges they meet on the way.  The series is executive produced by James Chen Gu and Josh Selig (Wonder Pets).

UEI will be exhibiting at Licensing International Expo at booth: B154.