Beijing-based Light Chaser Animation has announced that its first film, Little Door Gods, will be released in China on January 1, 2016.

Door Gods are guardian spirits protecting households in the tradition of Chinese folklore. Written and directed by Gary Wang, Little Door Gods is a modern-day story of two Door Gods facing unemployment in the spirit world, as ever fewer people in the human world believe in the spirits anymore. One of the spirits ventures into the human world to make trouble in order to prove his value, leading to unexpected encounters and transformations.

-- Only on AWN: Light Chaser Animation and the ‘Door Guardians’ --

Light Chaser started production of Little Door Gods in January 2013. After 29 months, the movie has finished production according to schedule and entered post-production earlier this month. According to producer Yu Zhou, from its story, to animation, to lighting, Little Door Gods has been meticulously crafted to achieve the highest quality, and the final picture required 80 million render hours to produce. The movie's music and sound effects were both produced in Dolby Atmos, marking a first for domestic Chinese movies.

As scheduled, the 107-minute Little Door Gods will meet audiences in theaters on January 1, 2016. 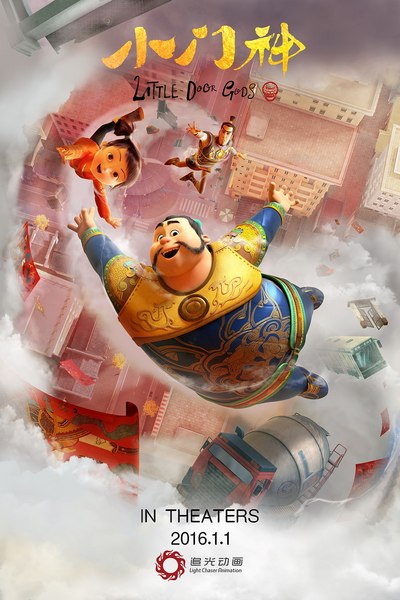