Clips, episodes and discussions of the show disappear from Middle Kingdom digital sites after Wednesday’s airing of episode critical of Hollywood’s appeasement of Chinese government. 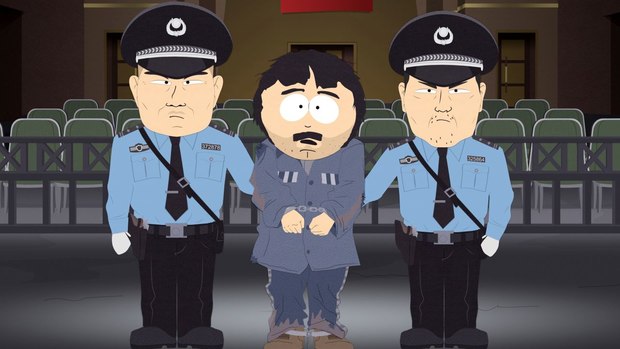 Add one more instance of head-scratching Chinese government reaction to foreign criticism, as all online references to Comedy Central’s South Park, including clips, episodes and discussions, have been removed from the internet in China, in response to the show’s latest episode, “Band in China,” according to The Hollywood Reporter.  The website noted that their search of Weibo, China’s Twitter-like social media service, as well as Baidu’s Tieba online discussion platform, didn’t turn up a single mention or working listing of the show among literally billions of posts and threads. Links to clips and episodes of the series on ecommerce giant Alibaba’s Youku streaming service reportedly no longer work as well.

The offending episode, which aired this past Wednesday, featured dual story lines destined to raise eyebrows in The Middle Kingdom. In one, Randy Marsh gets arrested for selling marijuana in China and is sent to a work camp patterned after the Xinjiang Provence camps Western sources claim are holding more than one million Chinese Muslims for forced “re-education,” a claim Chinese authorities deny. At the camp, Randy happens to run into fellow prisoner Winnie the Pooh, a not-so-subtle jab at Chinese censors’ ongoing ban on imagery of the gentle, honey-loving stuffed animal after online mocking of president Xi Jinping’s slightly rounded bear-shaped physique using the iconic character became a viral sensation several years ago. In the second, our favorite South Park lads form a heavy metal band that gains enough popularity to attract a manager; the script of a film they plan to make keeps changing in their hopes of securing Chinese distribution. In one hilarious moment, Stans says, “Now I know how Hollywood writers feel," while a Chinese guard stands over him as he works on the script. In another shot at Disney, Mickey Mouse makes an appearance to ensure Marvel and other Disney cartoon characters make nice with Chinese authorities.

Yesterday, in response to the Chinese government content removal, South Park creators, on the show’s official Twitter account, tweeted, “You gotta lower your ideals of freedom if you wanna suck on the warm teat of China.”

This controversy follows one that erupted just this past week, in of all places, the NBA, after Houston Rocket’s general manager Daryl Morey tweeted support for pro-democracy protesters that have been demonstrating in the thousands for weeks against the Hong Kong government. His comment was met with widespread criticism in China, where basketball is a hugely popular sport, fed, in part, by the success and public embrace of Chinese all-star center Yao Ming, the retired, 7’6” NBA star who is widely respected after a stellar pro career with… the Houston Rockets.

Morey eventually deleted his tweet, later issuing a statement on Twitter that read, in part, “I did not intend my tweet to cause any offense to Rockets fans and friends of mine in China. I was merely voicing one thought, based on one interpretation, of one complicated event. I have had a lot of opportunity since that tweet to hear and consider other perspectives”

Yesterday, the NBA issued its own statement, saying it recognized that Morey's comments "have deeply offended many of our friends and fans in China, which is regrettable."