Glendale, CA -- The celebrated children’s character Noddy returns to television with a new series, Noddy, Toyland Detective, to debut in 2016 on France Télévisions’ France 5, bringing an all-new look to Noddy and the residents of Toyland for 52 new 11-minute episodes.

The new CG-animated series is produced by Gaumont Animation in association with DreamWorks Animation Television and in partnership with France Télévisions. It will premiere on commissioning broadcaster France 5’s “Zouzous” in spring 2016.

Viewers will join Noddy on adventures throughout Toyland, accompanied by friends both new and familiar – including his iconic car, as well as Big Ears and Bumpy.   Through Noddy’s newly established role as Toyland Detective, he’ll show children how to investigate their world and make their own discoveries as he looks for clues to mysteries in each episode.

“We are very proud and excited to launch this brand new Noddy, a promise of engagement for our preschool audience,” said Tiphaine de Raguenel, head of Youth Programs for France Télévisions. “This new series is a specific program with original codes and goals, such as rituals, a kid-friendly signature language and core values.”

Pierre Belaisch, CEO of Gaumont Animation, added: “The production of this new Noddy series is an amazing experience. It is always a very exciting challenge to work on such a property, bringing fresh new elements, but without losing the essence of it! Besides, France Télévisions and DreamWorks Animation Television are great partners on this, always making things move forward.”

While Noddy remains immediately identifiable, his iconic look –  from the tip of his blue hat to soles of his red shoes –  has been given a contemporary makeover to suit the more adventurous and clever Noddy for a new generation. 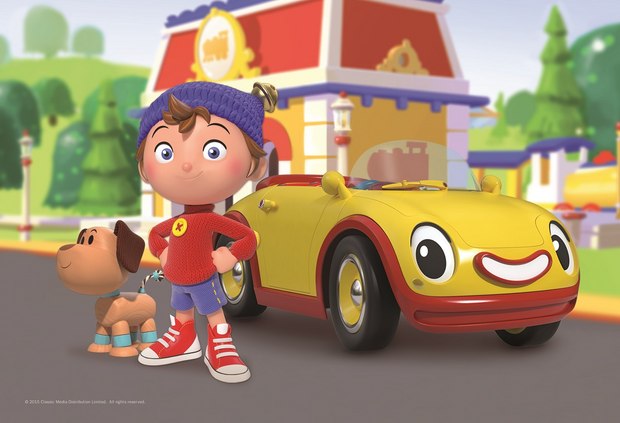 “A whole new generation of children gets to meet Noddy and join him on adventures across Toyland,” said Margie Cohn, head of television for DreamWorks Animation.  “Our new series retains everything that made Noddy the global phenomenon he is today, with exciting updates that will encourage a whole new group of fans to become natural investigators of their own world.”

Big Ears, Bumpy and Noddy’s car will also receive updated looks that build on the unforgettable fun of these classic characters.  The series marks the first time in Noddy’s TV history that his car will come “alive” with his own unique personality.  Named Revs, he eagerly races around as Noddy’s sidekick and communicates through a variety of honks and adorable car noises.

In addition to the refreshed look of Noddy and his friends, the world of Toyland will expand in the new series. Noddy’s investigations will take audiences on adventures through new lands like the fantastical Fable Fields, the delightful Animal Acres and the busy metropolis of Brickabuild, introducing new characters and locations along the way.

Created by renowned children’s author Enid Blyton, Noddy was first published in “Noddy Goes To Toyland” in 1949, and remains one of Britain’s most beloved characters.  His television debut came in 1954 with “The Adventures of Noddy” and, in the same year, “Noddy in Toyland” appeared on the London stage. Noddy’s popularity took him to France in 1963 where he is known as Oui-Oui and remains a perennial favorite.

In addition to the new series, Noddy television programming encompasses a vast library consisting of more than 250 episodes.  On TV, Noddy has been seen in more than 100 countries, and more than 250 million Noddy books have been sold worldwide.