CHF Entertainment’s animated ‘Daisy & Ollie’ is based on an original idea by Helen Brown and developed with Executive Producer Jason Manford, and will encourage young children’s curiosity about the world around them this October, exclusivley on Cartoonito. 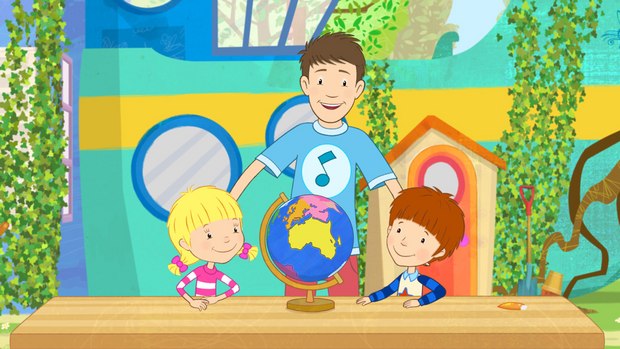 London -- CHF Entertainment has announced new characters and content additions to its family with the launch of, Daisy & Ollie, an animated series for the pre-school audience, premiering exclusively on Cartoonito this October.

Based on an original idea by Helen Brown and developed by CHF Entertainment with Executive Producer Jason Manford, Daisy & Ollie encourages young children to be curious and question the world around them.

Daisy & Ollie, along with their extraordinary toys, Boo the Monkey and Whizzy the Robot,

work together to discover the answers to their questions. Daisy’s dad is a musician filling every episode with music and songs. He’s a bit of a joker with a dry sense of humour and often gets caught up in the children’s adventures.

Jason Manford has been instrumental in the development of the show as executive producer alongside Helen Brown and has written many of the scripts, as well as voicing both “Daddy” and “Whizzy the Robot.”

Jason Manford said: “It’s an absolute joy to work on Daisy & Ollie, and I was so eager to get involved knowing that I could finally make a show that my own kids could watch and enjoy. I spend so much time watching kids TV that I know what it’s like for adults to have to sit through shows that aren’t aimed at us. This show has something for everyone and you can all enjoy it together, like I will with my children.”

Helen Brown added: “Creating and developing Daisy & Ollie with the immensely talented team at CHF has been such a pleasure and I’m thrilled to be managing the project through the studio pipeline; it’s a dream come true! The show was inspired by my daughter Daisy, who asks me hundreds of varied and entertaining questions every day, which I think all parents will relate to.”

Sean Gorman, Programming Director of Kids’ Channels UK, Turner, said, “We’re happy to be launching the UK-produced Daisy & Ollie on Cartoonito. Kids are so inquisitive and we think anyone who has spent any time at all with kids will be able to relate to the way this show conveys their funny and sometimes difficult questions. We think it’s important to encourage this curiosity when they’re growing up and Daisy & Ollie is a great example of how a show can make every day learning into a great adventure.”

The 52 x 7’ minute 2D episodes are produced using Toon Boom technology at the CHF Studios in Wilmslow. Not only does the show have a very talented team behind it at CHF, but has attracted world class voice artists Jason Manford, Sarah Hadland and Claire Morgan.

“It’s great fun behaving like a child in the studio, I love it! Daisy’s a great little character, inquisitive and lively like most little girls really. She’s got a really special relationship with her Daddy, often turning the joke on him! We’ve got a great cast, it’s a joy to do, there’s lots of laughs!” said Sarah Hadland, who voices Daisy.

Claire Morgan added: “Children ask a lot of awkward questions… and often in public! I think Daisy & Ollie will help a lot of parents out with the answers. I play Ollie and also Boo the cheeky monkey. Ollie is a kind, thoughtful and smart little boy who asks lots of questions and Boo is an excitable monkey! Both characters are a lot of fun to play, in fact it’s possibly the most fun you can have in a studio!”