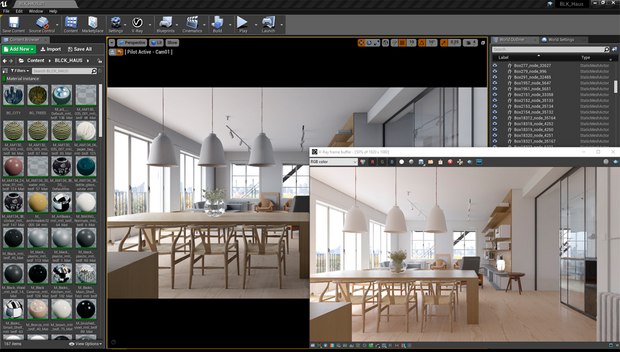 Chaos Group has released a beta for its V-Ray for Unreal app, which allows users to directly export V-Ray scenes into Unreal Engine.

LOS ANGELES -- Chaos Group has introduced the beta for V-Ray for Unreal, joining real-time and ray tracing in a single, unified pipeline.

Artists and designers can now bring V-Ray scenes directly into the Unreal Editor, facilitating the fast and simple creation of immersive experiences. V-Ray for Unreal also introduces the first ray-tracer designed for Unreal, a new development that brings true photorealistic rendering to the popular game engine.

The rise in popularity of real-time applications for configurators, design reviews, virtual production and VR has presented an opportunity to bind ray tracing -- the most realistic style of rendering -- to this emerging toolset. In the past, bridging the two has been challenging, requiring users familiar with 3ds Max and SketchUp to recreate their key design choices like lighting and materials in Unreal. With V-Ray for Unreal, artists and designers can transfer the entirety of their scene directly into real-time.

“Transitioning from offline to real-time used to be a lot of work, prohibitively so for most of our users,” said Simeon Balabanov, V-Ray for Unreal Product Manager at Chaos Group. “Now with V-Ray for Unreal, users can not only build assets in a familiar way, but they can bring them into real-time without losing the ability to render out ray-traced versions later. It’s a big change.”

V-Ray for Unreal is designed to be simple, acting as a natural extension of the visualization workflow. Using the V-Ray for Unreal importer, artists can bring every part of their V-Ray scene file into the game engine, automatically converting lights and materials into their real-time equivalents. V-Ray for Unreal also maintains a smart connection to the original V-Ray materials to ensure the highest fidelity renders. At render time, V-Ray leverages the combined power of GPUs and CPUs for ultrafast ray tracing.

“As an architectural visualization studio, we create a wide range of visuals from ray traced imagery and animation, to fully-immersive, interactive VR experiences,” said Jackson Doherty, VR Engineer at Kilograph. “Until now, there’s been a great divide between the two worlds. Now with V-Ray for Unreal, we can offer our full suite of services using a single, simplified workflow. And all of our artists can jump in, which is a massive benefit for us.”

V-Ray for Unreal can also be applied to CAD workflows, bringing the power of V-Ray to new users. As geometry is imported from programs like Solidworks, designers will be able to apply V-Ray lighting and materials to their assets, preparing them for a photorealistic result.

The V-Ray for Unreal beta is open to all artists and designers. Sign up now.