A new year of anime fun is yours with a visit from the doctor, a trip to the library, a fight with a dragon, and a visit to a strange new world with The Loot Company’s Crunchyroll crate. 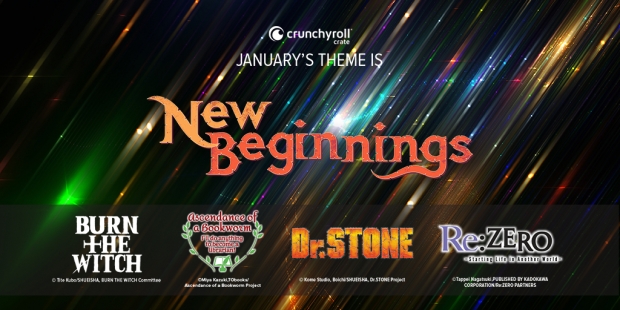 New year, new way to treat yo-self! Celebrate the “New Beginnings” of January with The Loot Company’s Crunchyroll Crate. Look forward to beloved titles like Dr. Stone, BURN THE WITCH, Ascendance of a Bookworm, and Re:ZERO - Starting Life in Another World. There may also be a special appearance from Crunchyroll’s beloved princess, Crunchyroll-Hime!

Get acquainted with some of the titles featured in January’s crate:

In Dr. STONE, several thousand years after a mysterious phenomenon turns all of humanity to stone, Senku Ishigami, awakens. Facing a world of stone and the total collapse of civilization, Senku decides to use science to rebuild the world. Starting with childhood friend Taiju Oki, who awakened at the same time, they will begin to rebuild civilization from nothing... Witness the crafting-adventure story depicting two million years of scientific history from the Stone Age to present day.

Witch duo Noel Niihashi and Ninny Spangcole are on a mission: protect Reverse London from dragons in BURN THE WITCH!

In Ascendance of a Bookworm, college student Motosu Urano dies and is reborn as Main, the daughter of a poor soldier, armed only with her love of books.

In Re:ZERO - Starting Life in Another World, Natsuki Subaru is transported to a strange world where he is saved by a beautiful silver-haired girl. In repayment, Subaru agrees to help her find something she's looking for…

The January Crunchyroll crate “New Beginnings” is filled with exclusive items and gear you can only find from Loot Crate. Prevent holiday hangover and fulfill some anime resolutions with this awesome assortment of swag by January 15th at 9:00pm PST and get your hands on the new theme at 9:00pm PST tonight, December 15th. Crunchyroll crates start at $28.95 plus shipping and handling. Supplies are limited, so get yours before it sells out!