Celebrate National Dinosaur Day with Kabillion on May 15! 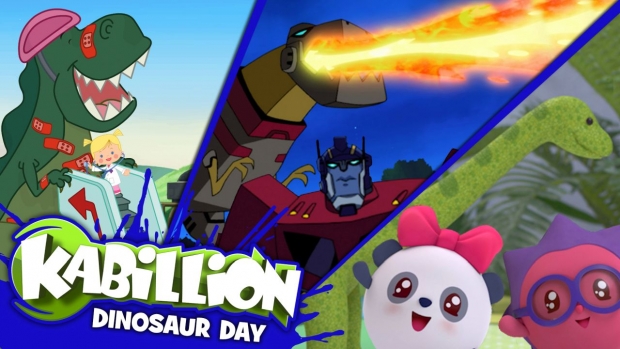 On May 15, Kabillion will mark National Dinosaur Day by bringing families back to the Mesozoic Era with special dino-themed content. From battling with animatronic dinosaurs in Transformers Animated: Blast from the Past and finding living 170-million-year-old dinos in Gumby; to accidentally skateboarding back in time in Wild Grinders: Jurassic Skate Park; and helping animals, from the smallest mouse to the biggest dino, in Chloe’s Closet: Do Little Do Big; families will have dino-sized fun learning about their favorite dinosaurs and exploring the past!

The new Freebies section of the Kabillion website features printable/downloadable word searches and coloring pages, including characters and scenes from some of kids' favorite Kabillion shows, to help extend the fun beyond the screen.

Transformers Animated: “Blast from the Past”

Chloe’s Closet: “Do Little Do Big”

Hero 108: “The Return of the Pterodactyls”

Kabillion is available on demand on most cable and satellite providers and streaming on Apple TV, Amazon Fire TV, Roku, Sling, and XUMO.