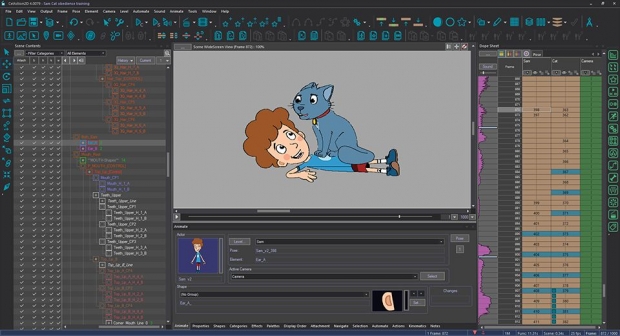 London-based CelAction has just announced the immediate availability of the first in their new Version 4 range of CelAction2D products, built on a completely new core engine that will form the basis of rapid updates to their leading 2D animation technology into the new decade.

As the animation community continues working through an incredibly trying year while facing an uncertain future, CelAction2D Version 4 has focused their V4 toolset on important production priorities; bringing new and diverse talent up to speed and giving animators of all experience levels the ability to generate more footage than ever before.

According to Andy Blazdell, CelAction CEO, “With Version 4 we’ve targeted discoverability and productivity. People can learn faster and then animate faster. And as well as reducing the total cost of production, we want to reduce the total cost of ownership too. Version 4 is so easy to use, it requires less support, so we’re passing those savings on to animators. We’re reducing our prices by 20% across the board for Version 4, and anyone who bought a previous version, even as far back as Version 1, will get a free upgrade. Now is the time to support the animation industry with actions, not just words.”

With more animation production teams starting up around the world, CelAction has added new modular options to their perpetual-license range. The first module, CelAction2D Animator Edition, is a less expensive version of the popular CelAction2D Professional Edition, but without the rigging tools. This means smaller studios can buy just a couple of Professional Edition licenses for their riggers, and their animators can work with the Animator Edition licenses, decreasing their capital costs while still providing for needed support across the production.

For larger projects, CelAction2D Studio Edition now has a monthly per-user rental option, allowing users to expand their teams dynamically and still get cost-effective access to the most powerful 2D animation software when they need it most.

“With previous versions of CelAction2D, our clients animated international successes such as Peppa Pig, Bluey, Mr. Bean and Simon’s Cat,” Blazdell added. “We can’t wait to see what will be created with Version 4.”

Details on the new CelAction2D Version 4 range can be found here.