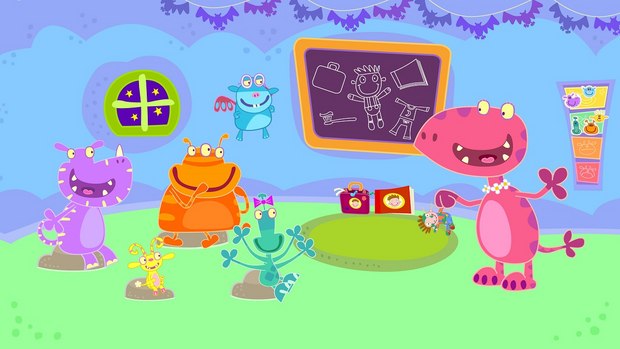 Created by Alan Robinson at Dot To Dot and executive produced by Jo Killingley, School of Roars was acquired by CBeebies in the U.K. and Sprout, NBCUniversal Cable Entertainment’s 24-hour preschool network, in the U.S. ZDF Enterprises will handle worldwide distribution, and further investment in the production comes from Creative Europe.

School of Roars follows five mini monsters through their school day as they learn “monstery lessons” in math, music, cooking, and life. The class is taught by the loveable Miss Grizzlesniff, who is voiced by Kathy Burke (Gimme Gimme Gimme). Other voices in the series include Sarah Lancashire (Happy Valley, Last Tango in Halifax) who plays the “Headmonstress,” Mrs. Twirlyhorn, and narrator Andrew Scott (Sherlock), who also voices other characters including cooking teacher Mr. Marrow.

School of Roars is being animated at Dot To Dot’s in-house studio. The studio, which is based in Chiswick and employs 25 people, was set-up with the aim of driving the company’s production and creative capabilities to new levels. Other shows to be completed at the studio include CBeebies’ mixed media project, Footy Pups, which was also created by Dot To Dot. The show will be supported by strong interactive elements including games apps, story apps and a website.

“School of Roars is a unique and exciting property that will appeal to both children and their parents, as it not only educates but prepares children for school in a fun and engaging way,” said Jo Killingley, Founder of Dot to Dot. “What makes it even more exciting is that it is created, developed, produced and animated in-house by Dot To Dot following the launch of our own animation studio. The new studio will be producing and developing material for children of all ages.”

“We’re sure our youngest viewers will be enchanted by the friendly school-based adventures, the bright design and the quirky humor, whilst parents may be surprised by the hugely talented stellar supporting cast,” commented Kay Benbow, Controller, CBeebies. “We hope it’ll become another monster-mazing, super-snufflesome CBeebies favorite!”

“After our successful partnership with Fun With Claude we are delighted to work together again with Dot To Dot Productions,” said Arne Lohmann, VP, ZDFE, Junior. “We are sure that School of Roars will be loved by children all over the world, as the mini monsters' daily life is very similar to their own.”

School of Roars (52x7’) was acquired by Kay Benbow, Controller of CBeebies and Jackie Edwards, Head of Acquisitions and Independent Animation. The series was created by Alan Robinson, Head of Development at Dot To Dot and is executive produced by Jo Killingley for Dot To Dot and Sarah Legg for CBeebies. It will be distributed by ZDF Enterprises and is scheduled to air in early 2017.