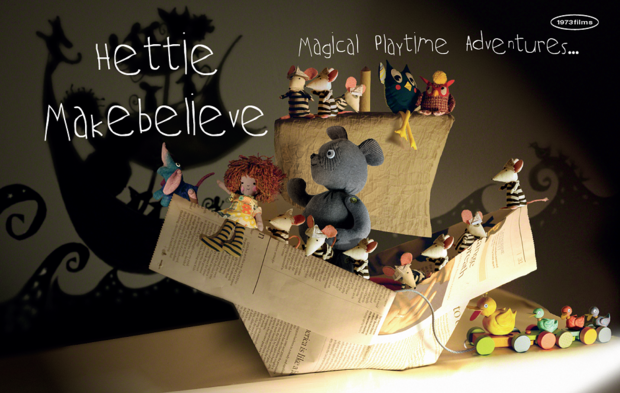 The award winning producer Tim Goodchild of 1973 Films announced that their new 52X7' animation series Hettie Makebelieve has been pre-bought by CBeebies.

Hettie Makebelieve is a stop frame animation series about a collection of toys who come to life and create amazing new worlds of adventure. It’s about imagination and boundless creative fun as the friends make up fantastical stories in each magical episode.

Producer/Director and co-creator Tim Goodchild has garnered multiple awards over a 30 year career in television production. These have included multiple Emmys and a BAFTA for his work in mainly factual programming such as Last Day of The Dinosaurs, 9/11 The TwinTowers and The Human Body. He is joined in 1973 Films by Art Director and co-creator Louise Scott, a professional illustrator, sculptor and animator.

Hettie Makebelieve will be produced in the UK by renowned stop motion animation studio and model makers Mackinnon and Saunders whose award winning work has contributed to Wes Anderson’s Fantastic Mr. Fox, Tim Burton’s Corpse Bride and Frankenweenie as well as TV series such as Bob the Builder, Postman Pat and The Clangers, among many more.

Kay Benbow, Controller of CBeebies, says “I was struck by the gorgeous design when Hettie Makebelieve was first pitched to us and I believe the distinctive look and quirky premise of the show will delight our youngest audience. CBeebies has a proud history of supporting stop-frame animation and I’m excited about adding Hettie Makebelieve to our diverse and popular animation slate.”