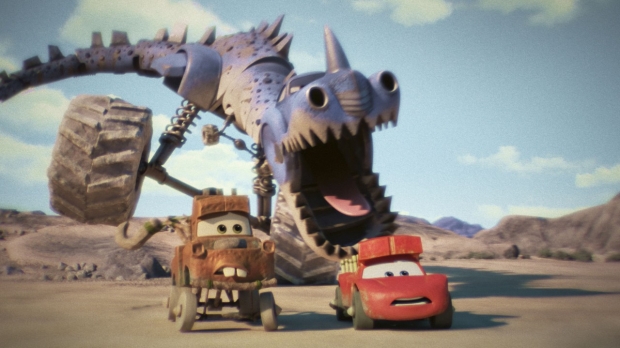 September 5 was Lightning McQueen Day (9/5 for No. 95), and in its honor, Disney+ is giving viewers a peek at Disney and Pixar’s original 3D CGI series Cars on the Road ahead of its debut. Check out the newly released Cars on the Road soundtrack, a three-minute clip from Episode 3, "Salt Fever;" the series' opening credits sequence and its catchy theme song; and some newly released images. The Disney+ Original series follows Lightning McQueen (Owen Wilson) and his best friend Mater (Larry the Cable Guy) as they head east from Radiator Springs on a cross-country road trip to meet up with Mater’s sister.

Premiering on Disney+ Day, September 8, Cars on the Road, Marc Sondheimer produces with directors Steve Purcell (episodes 1, 2, and 8), Bobby Podesta (episodes 5, 6, and 9), and Brian Fee (episodes 3, 4, and 6). Composer Jake Monaco scored all nine episodes featured on the Cars on the Road soundtrack from Walt Disney Records.

The soundtrack (now available here) features the musical talents of 79 musicians and 17 singers and showcases moments from the series, including the full version of the theme song and the toe-tapping "Trucks" and "Brain on Wheels."

Check out the Cars on the Road opening credits sequence and theme song:

Faster than fast and quicker than quick! Check out this new clip from Disney and Pixar’s #CarsOnTheRoad, a #DisneyPlusDay premiere, streaming September 8 on @DisneyPlus. pic.twitter.com/nNYqjkQuSO