New seasons of the expanded adult-oriented animated series to premiere on MONDO’s VRV, a new video experience from Ellation. 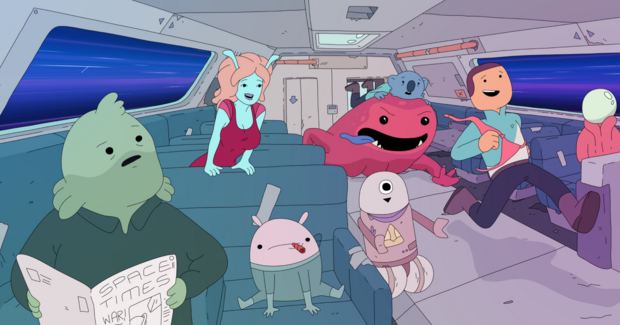 MONDO’s L.A.-based production arm, Six Point Harness, has begun on brand-new episodes of both series, which began as short-form videos that became break-out Internet hits. MONDO is producing eight new episodes of each series, for a total of nearly three hours of new animation.

Cat Agent was created by Emmy Award-winning director Kent Osborne -- who was head writer of Adventure Time and writer and storyboard director for SpongeBob SquarePants. Cat Agent views the weird, wild world of celebrity and fame through the fluffy feline eyes of Cat Agent, a cat who’s an agent representing the cats who belong to some of the biggest names in Hollywood. Osborne also provides the voice of Cat Agent in the series.

Deep Space 69, which will enter its fourth season, is the creation of Daniel Katz (Xemoland, Beer Cops) and features the voice of Dan Gordon as Jay, an intergalactic pilot who travels the galaxy with his koala first mate Hamilton (Jeff LaPensee) in search of sex, sexual exploits and sexual conquests. The first three seasons of Deep Space 69, originally available on YouTube, have attracted more than 50 million views. British Columbia-based animation studio Yeti Farm Creative will also work on the production of both Cat Agent and Deep Space 69, which are expected to debut their new episodes in mid-2017.

“Fans have been telling us they want to see more episodes of both of these subversive, funny, unique and incredibly popular series. Out of dozens of original series we’ve produced and commissioned during the past few years, these two shows have shown themselves to be a cut above the competition,” said MONDO’s chief creative officer Brendan Burch.

Los Angeles-based MONDO produces original animated content for its multi-platform network, as well as for television and digital. The company owns and distributes an ever-growing library of short- and long-form animation created for 18- to 34-year-old viewers, including the highly acclaimed 2016 Oscar nominee Pear Cider and Cigarettes, which is also available on VRV’s MONDO channel. MONDO operates the most-viewed animation channel on YouTube, which has attracted more than 3 billion views. MONDO’s original TV projects include Night Sweats, which aired on Adult Swim Canada; Like, Share, Die, which aired on Fusion; and Happy Tree Friends, which aired on MTV in multiple international markets.