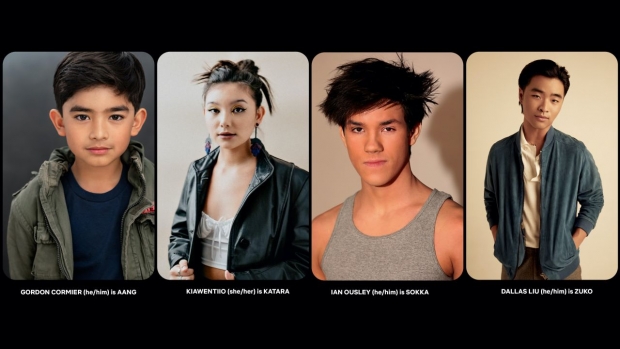 The Fire Nation will attack again! Netflix’s live-action adaptation of Nickelodeon’s beloved animated series Avatar: The Last Airbender has scored its leading cast, and it’s…good?! After the M. Night movie debacle, fans will be excited to learn the POC characters will actually be played by age appropriate POC actors (this shouldn’t be a revelation). The sensational casting choices were shared this week on the streaming giant’s Twitter account:

Meet the cast of our Avatar: The Last Airbender live-action series! pic.twitter.com/EaPqmuo94e

Gordon Cormier (Lost in Space, The Stand) is Aang, the Last Airbender himself; Kiawentiio (Beans, Anne with an E) is Katara, Aang’s water-bending protégé and friend; Ian Ousley (13 Reasons Why, Physical) is Sokka, Katara’s sarcastic brother; Dallas Liu (Shang-Chi and the Legend of the Ten Rings, PEN15) is Zuko, the fiery prince in exile.

After the shocking exit of original series creators Michael Dante DiMartino and Bryan Konietzko due to an “unsupportive environment,” the future of the live-action series seemed grim. However, showrunner Albert Kim (Sleepy Hollow) is steadfast on remaining true to the heart of the original animated series to “establish a new benchmark in representation and bring in a whole new generation of fans” while showcasing, “Asian and Indigenous characters as living, breathing people.” Outstanding.

Netflix has not yet announced a release date. Watch all three seasons of the original animated series, or all four seasons of Legend of Korra, now on Netflix or DVD.