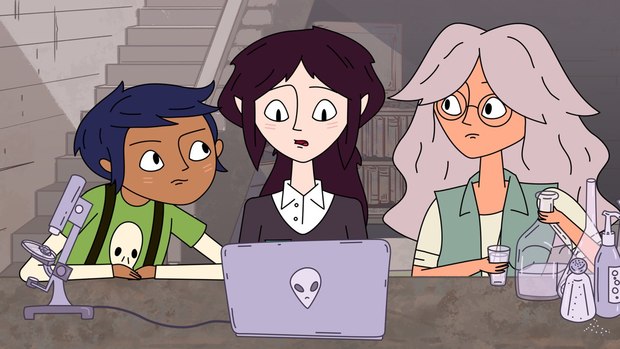 ‘Human Kind Of’ is created by producer and writer Diana McCorry.

BROOKLYN, NY -- Adult-skewing digital media company Cartuna has debuted two new animated short-form series -- Human Kind Of and Liverspots and Astronots -- on Facebook Watch. Each show will have a 21-episode season and will roll out three new episodes per week.

Created by producer and writer Diana McCorry, and featuring the voice talents of Michelle Trachtenberg, Kate Berlant, Jill Talley, Zak Orth, John Early, and Betsy Sodaro, Human Kind Of is an off-kilter comedy about a half alien teenager struggling with the extraterrestrial world of high school. The first three episodes premiered on Sunday, September 16, with an additional three episodes premiering each Sunday thereafter until the season finale on Sunday, October 28.

The series follows Judy Reilly, a nerdy teenager who finds out that her estranged father was an extraterrestrial. Surviving a half-alien adolescence seem pretty hopeless but, with the help of a dangerously upbeat mother and a comic book-obsessed best friend, Judy is able to uncover her powers, stand up to bullies, and inevitably discover what makes her both alien and human along the way.

Check out the first episode, in which Judy Reilly wakes up on her 16th birthday to find that her period has become a gigantic sentient monster that can say her name (which is totally normal and fine, btw), in the player below:

A ten-year passion project in the making, Liverspots and Astronots is a buddy comedy about a nursing home in space, filled with funky old folks who discover they are integral to the survival of the universe. No one seems to know why Dusty Craters, a dilapidated nursing home, is floating through space carrying a colorful assortment of grumpy old folks under the care of an evil goat doctor. But then again nothing seems to make sense in a world where a talking two-dollar bill lives in a Cracker Jack box and a three-eyed ape just might be the center of the universe. Best friends Roosi and Big Man uncover these mysteries and more as they go on one epic adventure after another.

The creators, writers, animators and surprise guests from both series will be participating in a panel and Q&A at New York Comic-Con on October 4 from 5:30pm-6:30pm in Room 1A10 at the Javits Center.