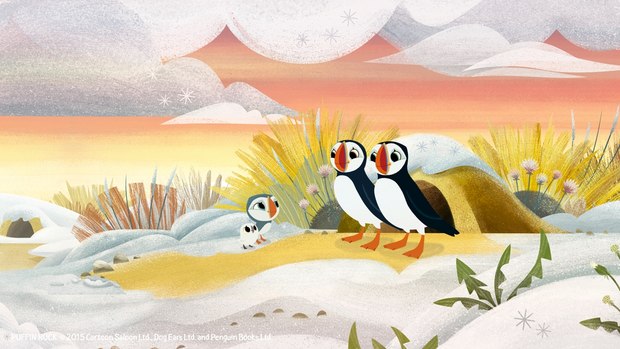 “We do whatever we can to grow everything here. Puffin Rock is a good example. That was created by people in this studio here, made in Ireland with Irish voices and everything -- and it’s been translated into almost 30 languages now,” said Mark Mullery, Cartoon Saloon’s technical director and compositing supervisor. “In keeping it 2D, we’re also bucking the 3D trend a bit.”

Spanning 78 brief episodes over two seasons to date, Puffin Rock is narrated by actor Chris O’Dowd; the series spotlights two young puffins -- Oona and her young brother, Baba -- as they navigate their own little world full of nature and wildlife. Cartoon Saloon uses TVPaint for hand-drawn animation, and relies on Autodesk Shotgun for reviewing and notes. Deadline helps the studio manage its render farm. When laying the groundwork to tackle Puffin Rock, Mullery and his team requested a few Deadline tweaks from Thinkbox and received a working prototype in about two weeks. He shared, “Once those adjustments were made, we knew Deadline was how we were going to run the series.”

Following the first season of Puffin Rock, Cartoon Saloon added Python Developer Gary Chadwick to its team, and he expanded and customized the studio’s Deadline usage. Now artists can choose to only render select layers within a scene, and file naming and management is handled automatically to save further time.

“Deadline’s customizability makes it feel like it can be taken apart and put back together in any way,” Mullery explained. “We’ve tried to make everything as predictable as possible, like scene names. Before Gary joined, our own artists were entering things into it manually, and we needed an intern whose task was just to enter jobs into Deadline.”

While the rendering requirements for 2D animation are relatively small, Deadline still provides Cartoon Saloon with a big advantage, not only in its speed and effectiveness, but also the ability to streamline the process for artists. Close integration with Shotgun has allowed them to significantly automate processes, allowing artists to simply click a button for Deadline to put items in the correct location.

“Deadline is incredibly cost effective for us: we have just four render nodes that we run in multiple departments, and a lot of different productions on them,” said Mullery. “For a 2D studio, if you think about it in terms of wanting your artists to deal with less hassle and you want the whole thing to be automated in organizational terms, it’s incredibly cost effective.”

Besides organizational enhancements, the biggest benefit Deadline has brought to Cartoon Saloon is the ability to squeeze out more time for iterations. Artists are able to quickly pass their work back and forth for review, leading to better-looking results. Cartoon Saloon’s Deadline-driven pipeline has also been huge factor in the studio’s expansion, as the team takes on larger projects such as upcoming animated feature The Breadwinner. “We know how Deadline works and how to customize everything,” Mullery concluded. “Basically I don’t have to worry about Deadline, because it’s always there as the backbone.”