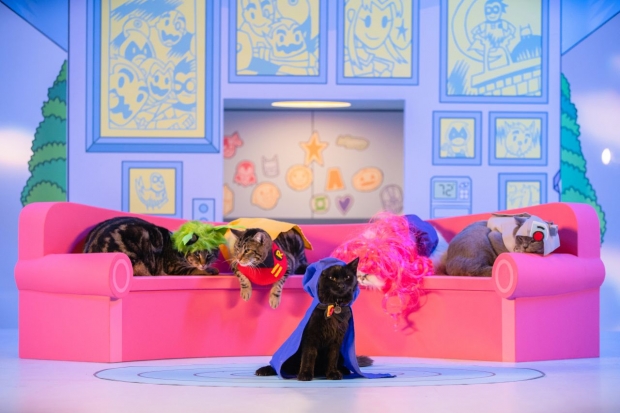 BURBANK -- Cartoon Network has announced a rebrand and complete overhaul of its Kids & Family programming to focus solely on cats.  The announcement was made today by the cats of the newly rebranded Cat-toon Network, who are assuming the leadership from its current President of Warner Bros. Global Kids, Young Adults and Classics, Tom Ascheim.

According to the APPA National Pet Owners Survey by the American Pet Products Association, there are approximately 85 million pet owners in the U.S. and a recent survey shows that cats are a preferred pet, with more than 42 million living in U.S. households.  Naturally, watching breeds like the laidback American Shorthair to the prissy Siamese is the purr-fect form of entertainment that parents, kids and families alike are shifting their viewing habits toward.

“Though Cartoon Network is the world’s most popular global animated network, in our opinion, it was figuratively ‘going to the dogs’,” meowed Beast Boy (in cat form), Gumball Watterson and Nicole Watterson, the freshly minted co-presidents, Warner Bros. Global Kids, Young Adults and Classics. “This rebrand will put the focus on what Americans really want to see – cats in all their splendor – starring in comedy, drama, reality and even hard news programs.”

Below is a look at new Cat-toon Network series in development:

And, something for the kids! (in development)