‘The Powerpuff Girls’ get supersized with a Townsville-inspired booth and panel, and debuts for fan-favorites ‘We Bare Bears’ and a sing-along ‘Steven Universe’ panel featuring a musical performance with Grammy Award winner Estelle. 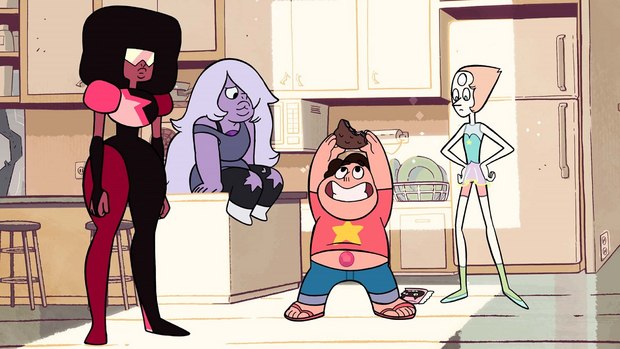 This year Cartoon Network will be at the San Diego Comic-Con and will feature debut panels of fan-favorites, The Powerpuff Girls, We Bare Bears. Also, see a first-of-its-kind musical panel of the critically-acclaimed Steven Universe that will have everyone singing alongside Grammy Award-winner Estelle, creator Rebecca Sugar and other key cast and crew. Soaring high above the convention floor, larger-than-life balloons of Blossom, Bubbles and Buttercup will be suspended above the Townsville-inspired booth (#3735). Fans can also walk away with their own, one-of-a-kind, custom-printed t-shirt or tote bag using the wildly popular Powerpuff Girls avatar maker, outfitted with designs and accessories exclusive to Comic Con.

Cartoon Network’s Screening and Costume Ball will make its return, offering an inside look at hit shows and a sneak peek at the upcoming global franchise Ben 10. Cartoon Network will also unveil a clip from Mighty Magiswords, its first-ever digital property to go linear. Adventure Time enthusiasts can put their Card Wars skills to the test with an all-day Adventure Time Card Wars Tournament. Other Cartoon Network series featured at San Diego Comic-Con include Teen Titans GO! and Justice League Action.

Below is a list of all panels, fan events, screenings and signings Thursday, July 21 – Saturday, July 23. Events as well as series producers and talent scheduled to appear are subject to change