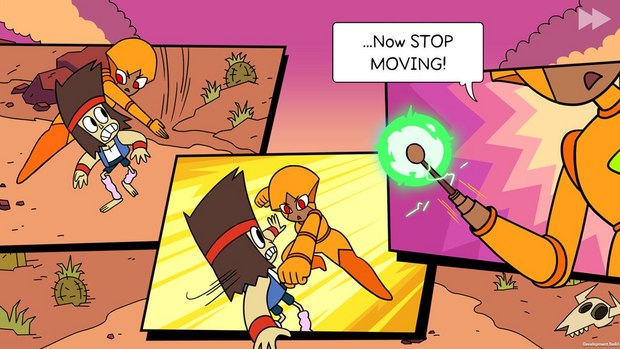 Following the mobile game launch, Cartoon Network will open up further content exploration to the independent game development community by hosting a Game Jam in Portland, Oregon on February 12-14. Two-Hundred (200) participating independent game developers will have 48 hours to create their own games based on the extensive cast of heroes in the Lakewood Plaza universe. Their creations will inform future iterations of the property and the winning team will be awarded a fully funded project to continue work on their game jam prototype. Additional honorees will have their projects published on CartoonNetwork.com. “Cartoon Network is no longer just creating series, we are creating animated worlds,” said Rob Sorcher, chief content officer for Cartoon Network. “OK K.O.! is part of our new development strategy which brings a diverse array of creative and digital talent collaborations to the storytelling process.”

Set in Lakewood Plaza, a mall for superheroes, OK K.O.! Lakewood Plaza Turbo follows hopeful young champion K.O. and his superhero convenience store buddies as they battle evil Lord Boxman, who is set on destroying the plaza with his army of inventive robots. K.O. must unlock special attacks, explore hidden areas and navigate challenging characters as he helps to defend and rebuild the Plaza. K.O. might even learn some new fighting techniques from his mom, Carol, who runs the plaza’s dojo. This relentlessly upbeat game, created by a collaboration of passionate gamers and animators is available as a free download on iOS and Android devices.