Festive month-long slate includes episodes of ‘Apple & Onion,’ ‘Total Dramarama,’ ‘Thundercats Roar!’ and a not to be missed airing of ‘Wonder Woman’ with exclusive content in the lead up to HBO Max’s Christmas day premiere of ‘Wonder Woman 1984.’ 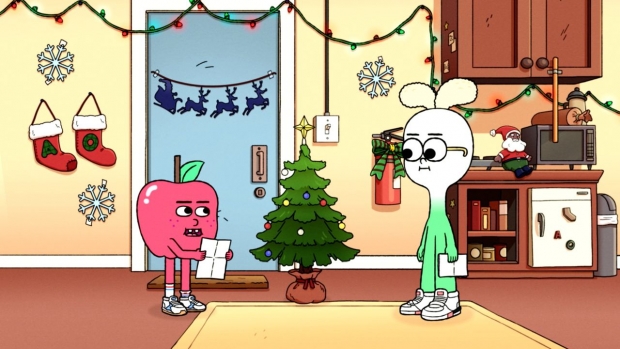 Cartoon Network kicks off the season with new series episodes, holiday-themed shows, and movies all month long. Snuggle with your favorite elf for the one-hour special, Elf: Buddy's Musical Christmas on Friday, December 4 at 7:00 p.m. ET/PT. Then, begin the morning of Saturday, December 5 with more festive new episodes of Apple & Onion, ThunderCats Roar! and Total Dramarama.

Celebrate every Saturday and Sunday at 7:00 p.m. ET/PT with fan favorite movies throughout December; films include The Lego Movie; Teen Titans Go! To the Movies; Paddington and many more. Also, catch new episodes DC Super Hero Girls and Teen Titans Go!, throughout the month.

On Sunday, December 20, Cartoon Network will air Wonder Woman as part of the network's "Superhero Weekend." Tune-in for exclusive content, behind-the-scenes and clips leading up to the highly anticipated premiere of Wonder Woman 1984 streaming on HBO Max and in theaters on December 25.

Santa Claus tells the story of Buddy's trip to New York to meet the father he never knew he had, and how Buddy transforms the lives of everyone he meets. "Mandora Saves Christmas" - Santa Claus is on the run from Mandora! Can the Thundercats help him get off Third Earth without getting caught? And can Santa Claus teach them a little something about this weird new holiday "Christmas"? "Me, My Elf, and I" - Duncan tricks Chef into taking the class to the North Pole to remove his name from the naughty list.

"Snow Country for Old Men" - In an attempt to win the holidays, Chef brings snowmen to life to entertain the kids. But when they turn out to be evil, Chef and the kids have to jingle some bells.

"Christmas Spirit"- Apple & Onion have to become mall Santas to get the gifts they want for Christmas.

"The Cast" - After breaking his leg, Robin is confined to his room and spies through a telescope. "Jelly Aches" - The school descends into chaos after getting a visit from Gazunga, the Jealousy Troll.

"Simply Perfect" -  When the kids are about to be subject to school testing with no time to study, Courtney freaks and orders a Brainiac Ray from the back of a comic book that does NOT work as advertised.

"Slobbery" - Apple and Onion have to get rid of Burger’s roommate so Burger will help them.

"Microwave's Dance Club" - Apple and Onion need more room in a packed nightclub in order to bust their dance moves.

"All Work and No Play" - Apple and Onion build eye masks to sleep at work so they can have more time for fun.

"Drone Shoes" - Apple and Onion need to find power to plug in their new drone shoes. "Superhero Feud" - Control Freak pits the Titans against the DC Superhero Girls to determine who is the best team in the universe.

#AwesomeAuntAntiope - Diana always preferred her “fun aunt” Antiope to her strict mother, but when Antiope visits Metropolis and takes the girls out on the town, Diana sees her aunt’s antics in a whole new light.

"Baby Brother Blues" - When Beth is told that the impending arrival of a baby brother is about to ruin her life, she runs away to find a new family.

"Space Codyty" - Izzy, convinced that Cody is an alien, embarks on a journey through space to take him back home. #FreshPrincessOfRenFaire - A fun day at the Renaissance Faire takes a dark turn when our heroes clash with a princess-eating dragon. Find these episodes on-demand first along with many others on the Cartoon Network app.