Cartoon Network Invites Kids Around Asia to Redraw Their World

On January 8, the channel launches its re-energized brand, ‘Redraw Your World,’ that promises to deliver more inclusive programming to wider audiences; campaign partnerships include Crayola, NTUC, and Singapore Chingay Parade 2022. 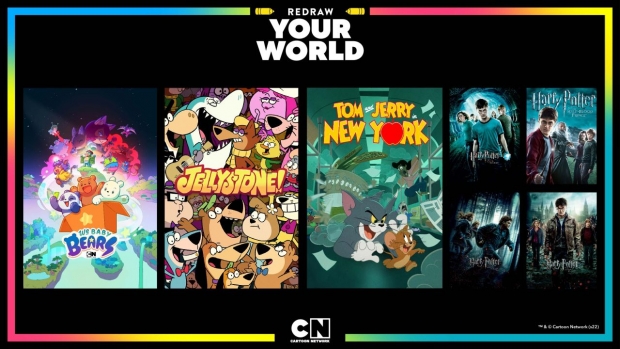 Starting this Saturday, January 8, Cartoon Network viewers around Southeast Asia, Korea, Hong Kong, and Taiwan will be enjoying a new, “re-energized” brand experience as part of the channel’s “Redraw Your World” campaign.

In addition to the channel’s refreshed look featuring vibrant colors, music, and design, new shows have been designed to appeal to an even wider demographic of boys and girls, including Cartoonito, the expansive pre-school programming block on Cartoon Network and HBO Max, which will launch in Asia later this year.

At the heart of the campaign, “Redraw Your World” encourages kids to always be true to themselves, and to be confident in their abilities to impact real change in both big and small ways. “Cartoon Network is committed to inspiring imaginations and empowering kids. It’s a vibrant and fun place where differences are always celebrated,” said Leslie Lee, Head of Cartoon Network and WarnerMedia Kids in Asia Pacific.

Kicking the campaign off on January 8 is the premiere of two episodes of the original series We Baby Bears. The series – a spinoff of We Bare Bears, one of Cartoon Network’s biggest series in Southeast Asia – tells the story of three brothers looking for a place to fit in.

We Baby Bears follows Grizz, Panda and Ice Bear – as their younger baby selves – travelling in a magical box to fantastic new worlds searching for a place to call home. Along the way, they meet new friends, learn a few lessons and discover that “home” can mean wherever they are, as long as they’re together. Episodes will be shown on Cartoon Network every weekend starting January 8, and will also be shown on Boomerang, HBO, HBO Family and Oh!K where available. Five episodes will be available to stream on HBO GO from January 8, with more added every month.

Off the channel, Cartoon Network is looking to launch pop-up doodle stations and craft videos powered by Crayola, the regional campaign’s official “Creativity Partner.” Armed with inspiration and the right tools for creativity, kids are invited to express themselves and let their imagination run free by drawing or doodling their vision of the world they want to live in.

The video series, Craft Your World, will launch on Cartoon Network Asia and Crayola websites and social channels in the coming weeks until the end of 2022. Crayola has inspired artistic creativity in children for almost 120 years – since its first box of crayons rolled off the assembly line.

“Redraw Your World” physical events are also taking place from February onwards in malls across the region, including in Singapore, Malaysia and Philippines. These will be complemented by a rich content offering including AR filters on Instagram.

Meanwhile, only in Singapore, Cartoon Network has teamed up with NTUC FairPrice and Plus! Programme in 2022 for a number of initiatives. Cartoon Network characters are also on show in the build up to the Chingay Parade 2022 later this month.

Other new shows and episodes debuting in 2022 include Jellystone! which premieres Saturday, January 22 and stars the iconic Yogi Bear, Cindy Bear, Boo Boo plus other characters constantly getting into trouble in the madcap little town of Jellystone.

New episodes of Tom and Jerry in New York, with the duo bringing fresh shenanigans to Manhattan, will run every weekend from January 15.