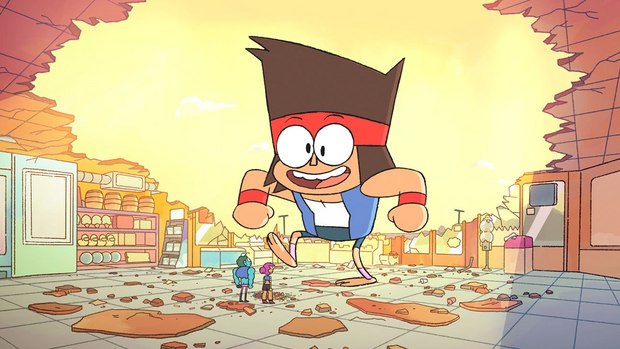 BURBANK, CA -- Cartoon Network powers up a connected world of original heroes across the TV and gaming landscape with the greenlight of animated series OK K.O.! Let’s Be Heroes followed by an integrated console game jointly developed with indie video game studio Capybara Games. Created by Ian Jones-Quartey, and produced by Cartoon Network Studios, the action-packed show follows the heroic feats of K.O., an endlessly optimistic kid attempting to level up to be the best he can be in a dynamic universe of friends and challenging foes. The console and PC game is an action brawler with RPG elements and is expected to arrive later this fall and will be previewed at PAX East on Friday, March 10.

“This combined launch marks the culmination of a unique multi-media development process,” said Rob Sorcher, chief content officer for Cartoon Network. “The result is an entirely connected world which provides deeper satisfaction as fans get further into the property from every access point.”

­Added Jones-Quartey: “For me, video games and animation have a lot in common and having fun is the main goal. OK K.O.! is a video game-inspired world expressed through the language of animation, but mostly an adventurous playground with heart-warming heroes who battle against robots.”

OK K.O.! Let’s Be Heroes is set in Lakewood Plaza, a mall for heroes, where K.O. and his cool crew of friends are constantly trying to impress each other in their efforts to level up and overcome the obstacles that evil foe Lord Boxman sends their way on his quest to destroy the plaza. A sneak peek of the new series will be presented at SXSW on Monday, March 13. OK K.O.! Let’s Be Heroes is slated to premiere this summer in the U.S. and will also roll out across global markets.

Jones-Quartey first joined the Cartoon Network family in 2010 as a storyboard artist on Secret Mountain Fort Awesome. Most recently, he served as the co-executive producer on the Emmy-nominated series Steven Universe. He is an alum of the School of Visual Arts in New York City.