Linear series debuts Thursday, September 29; 400 pieces of original content to be connected by a forthcoming mobile app for a fully engaged fan experience. 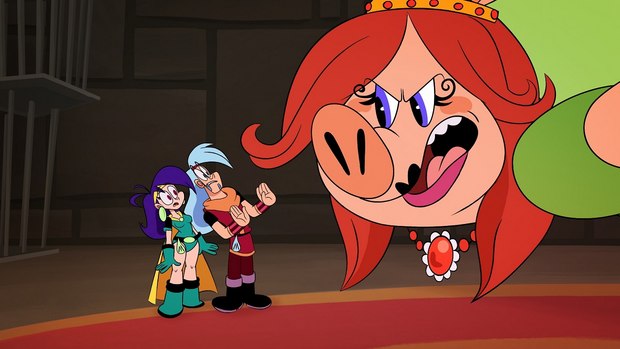 BURBANK, CA -- Cartoon Network continues to expand the Mighty Magiswords interactive world with its linear series debut, Thursday, Sept. 29 at 6:30p.m. (ET/PT). Building on the original 15-second series that launched last year on the CN Anything app, the new TV series continues the adventures of Prohyas and Vambre, a sibling team of “warriors for hire” who embark on heroic quests using outrageously funny, and sometimes functional swords called Magiswords.

From Zombie Pumpkin to Excaliburger Magiswords, the comedy series is part of a rich connected world of more than 400 pieces of original content including interactive shorts, narrative vlogs hosted by the warriors themselves and a multitude of digital games. Prohyas and Vambre will also bring their unique sense of humor as on-air hosts introducing Cartoon Network’s shows, events and more. The unique app launching later this fall and its interactive capabilities will bring Mighty Magiswords full circle as fans can watch and collect Magiswords in a fully-engaged ecosystem.

“Mighty Magiswords is custom created for the way young audiences consume media today,” said Rob Sorcher, chief content officer for Cartoon Network. “This is about how stories can be told in new ways and how a community can play together.”

A special sneak peek episode of Mighty Magiswords will debut on the Cartoon Network app Friday, Sept. 2. The series premieres on Thursday, Sept. 29, with the episode “The Mystery of Loch Mess” which follows the warriors who are sent on a mission to locate missing deliverymen only to find themselves captured as pets. Then in “Squirrelled Domination,” a rare food enthusiast sends the warriors on a mission to gather five golden acorns.

Mighty Magiswords is produced at Cartoon Network Studios and created by Kyle A. Carrozza (The SpongeBob Movie: Sponge Out of Water). The series follows Prohyas and Vambre, an outgoing brother and sister team of warriors for hire, who are always ready to take on any quest with their trusted and coveted collection of Magiswords that can fly, toss tomatoes, spit seeds and much more to ultimately result in a funny victory. The series’ guest stars include Weird Al Yankovic, Jack McBrayer, Dave Coulier, Tom Kenny and more.