With more than 46 million fans tuning in to watch the hit series in Q1 & Q2 2015, licensing program closes in on 100 licensees. 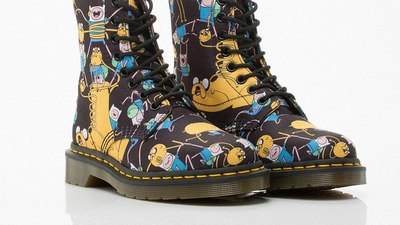 Over the past year the company has worked hard to transition the brand from niche property to mass-market bestseller, signing up a swathe of licensees across a wide range of categories. As well as a flourishing program in the UK, Adventure Time consumer products drives are also paying dividends in Russia, Poland, Hungary and Spain, while Italy, France, Germany and Benelux are due to launch soon.

The apparel category, where Adventure Time first began to enjoy consumer products traction, remains key. Further to the announcement of a new global partnership with high-end Spanish fashion brand Desigual for a new line of girls' apparel that will roll-out in Q1 2016, Cartoon Network Enterprises is also proud to have expanded its relationship with Dr Martens. A second seasonal collection of boots for adults and children, featuring Finn, Jake and series favourite Marceline, launched this summer and Spring/Summer and Autumn/Winter 16 collections are already in the pipeline. Russian retailer TVOE is getting ready for the roll-out of its Autumn/Winter 2015 Adventure Time collection too, supported by an innovative marketing campaign aimed at driving consumer engagement with the brand. The retailer's first fashion collection featuring the property became its fastest selling fashion license ever when it launched back in April. It included apparel for men, women, boys and girls.

"We're delighted to be extending our partnership with Cartoon Network and introducing the new Autumn/Winter Adventure Time collection to our stores this month. The incredible sales figures we celebrated with our Adventure Time t-shirt range earlier this year far exceeded our expectations and became our fastest selling fashion license ever," said Igor Yushkevich, president of TVOE Group. "Adventure Time's originality, quirky humor and fascinating characters translate exceptionally well into fashion products and we're confident that the latest collection will be a hit with our consumers." In addition to all of this, a video game, Finn and Jake Investigations, will arrive on shelves later this month from Little Orbit and Namco Bandai. Next year, the brand will be featured in one of its most exciting adventures yet, a specially-designed Cartoon Network zone within IMG Worlds of Adventure in Dubai.The program is also growing through new agreements with other soft line licensees and in other categories. Kidrobot has just launched a line of collectable figures in the US, with an EMEA roll-out planned to follow in 2016, while Primark, Springfield, Defacto in Turkey and Polish retailers LPP, House and Reserved Kids are currently pushing their collections for young adults and kids. Polish e-retailer Mr Gugu also enjoyed a successful roll-out of vibrant apparel for young adults, while summer 2016 will see Smyk launch a wide apparel range for kids following the success of its boys t-shirt line in September 2015.

"It's fair to say that brands like Adventure Time don't come along very often," said Johanne Broadfield, Vice President, Cartoon Network Enterprises, Turner Broadcasting System EMEA. "It has that social currency that has enabled us to form the great and wide-reaching brand partnerships that we have to date and it possesses a coolness and credibility that connects organically with both partners and fans. Something tells us the adventure is just getting started!"