New 18 language campaign looks to educate kids about climate change, empowering them to join a community of young people to take on small changes that can ‘Make a World of Difference.’ 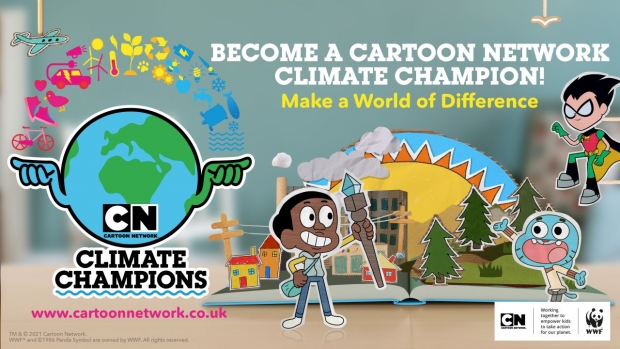 Cartoon Network is launching a brand-new multi-territory and multi-language climate change awareness initiative across EMEA. The campaign, “Cartoon Network Climate Champions,” sets out to inspire kids to take on small challenges that can make a world of difference to the health of our planet. The initiative has been developed in collaboration with global environmental organization WWF.

Launching in 18 languages, the multiplatform campaign seeks to educate Cartoon Network’s target audience of kids aged 6-12 about climate change. It aims to empower them to join a community of young people who are taking steps in their own lives to tackle one of the biggest challenges of our times. Cartoon Network’s brand-new Climate Champions microsite acts as the campaign hub with challenges, quizzes, games, and videos championing sustainability, and is also promoted on the Cartoon Network channel.

The specially designed daily challenges, tested by kids for kids, are crafted to inspire and motivate young people to make changes at home, at school and in their local communities, positively impacting the environment. A real-time map demonstrates how the Climate Champions are making a difference and will provide ongoing insights and data points into the myriad ways in which kids are engaging in the topic from country to country.

“Climate change is an incredibly important matter to the younger generation and something they see as a fundamental issue to their lives, but it can be hard to know what steps to take to make a difference,” commented Vanessa Brookman, Head of Kids, WarnerMedia EMEA. “We’re thrilled to now be able to provide our audience with the tools to get involved through Climate Champions, Cartoon Network’s most ambitious kids activation campaign ever in EMEA. We want to empower them to take action and send them the message that anyone can become a Climate Champion. Every single action, however small, has a positive impact.”

The initiative is supported by WWF, one of the world's leading independent conservation organizations. Cartoon Network has teamed up with WWF to provide simple and accessible explainer videos about the issues behind the climate-related headlines, in ways that kids can understand.

“Children have a huge thirst for knowledge and are some of the most passionate advocates for our planet. At WWF, we’re continuously inspired by our young supporters and their enthusiasm to learn about the natural world and how to protect it,” noted Kate Norgrove, executive director of Advocacy & Campaigns, WWF UK. “As future guardians of our planet, it’s important that young people not only care about nature but also understand the major environmental issues and solutions, which is why we’re delighted to be teaming up with Cartoon Network on its new climate awareness campaign. We hope it inspires many children and their families to become Climate Champions and take positive action for our one shared home.”

As part of the campaign, Cartoon Network has also collaborated with the Digital Video team at CNN to produce a series of first-person video articles featuring young change-makers across the EMEA region to inspire the Climate Champions and motivate others to get involved. The short vignettes spotlight some of the initiatives that young Cartoon Network fans are already involved in at a grassroots level and show how they are making a difference.