For the first time, 'We Bare Bears' and 'The Powerpuff Girls' featured in stand-alone back-to-back panels at San Diego Comic-Con International. Cartoon Network presented a back-to-back panel extravaganza featuring two of its most popular series, We Bare Bears and The Powerpuff Girls, both making their San Diego Comic-Con debuts with their first-ever standalone panels. Never-before-seen clips from the hit shows were unveiled at the Indigo Ballroom in the Hilton Bayfront for all fans to enjoy.

The We Bare Bears panel featured Annie Award-winning creator Daniel Chong, Lauren Sassen (Storyboard Artist), Mikey Heller (Series Writer) Manny Hernandez (Director), Eric Edelstein (Voice of Grizzly), Bobby Moynihan (Voice of Panda) and Demetri Martin (Voice of Ice Bear). Sassen did a live illustration to show fans how she brings the bro bears and their hilarious hijinks to life, and fans were treated to a special sneak peek from Icy Nights premiering later this year. In the episode, Ice Bear rides his custom vacuum into the city until a gang of techies steal his ride, forcing him to go on a rescue mission in the city’s underground world. Fans were among the first to get a special sneak peek at the all-new upcoming episode The Big Sleep in which the superhero sisters have to stop the Professor’s latest invention from wreaking havoc in the house:

Con-goers can still visit Blossom, Bubbles and Buttercup and use the popular Powerpuff Yourself online avatar maker at Cartoon Network’s Townsville-inspired booth (#3735)! After creating their very own Powerpuff avatar, complete with SDCC-exclusive clothing and accessories, fans can print their unique creations on a shirt or tote bag to take home. 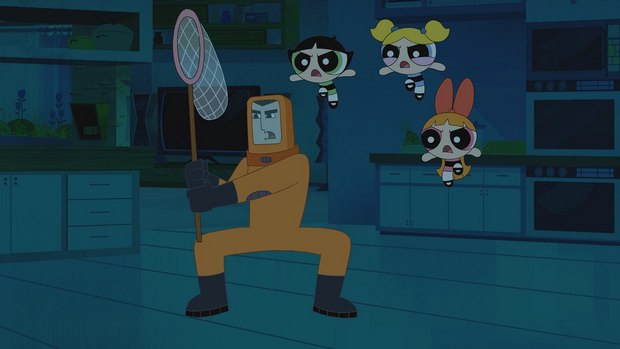