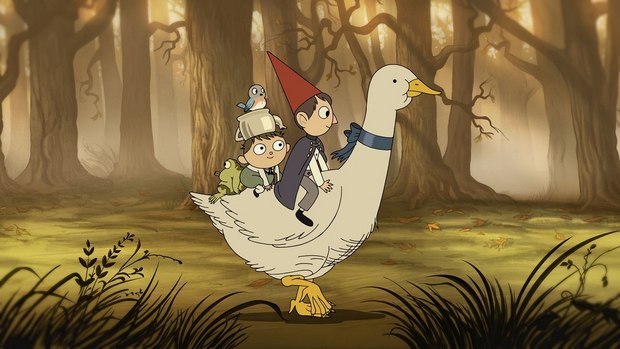 Come along with brothers Wirt and Greg on their puzzling adventures filled with twists and turns, friends and foes. Cartoon Network’s first animated miniseries Over the Garden Wall will premiere over five consecutive nights beginning Monday, November 3 at 7pm ET/PT. This ten-episode mystery adventure, created by Patrick McHale (Adventure Time), features the voices of Elijah Wood (Lord of the Rings Trilogy), Melanie Lynskey (Two and a Half Men) and Collin Dean (The War At Home) and is produced by Cartoon Network Studios.

Over the Garden Wall is the story of two brothers, Wirt (voiced by Elijah Wood) and Greg (voiced by Collin Dean), who find themselves lost in the Unknown; a strange forest adrift in time. With the help of a wise old Woodsman (voiced by Christopher Lloyd) and a foul-tempered bluebird named Beatrice (voiced by Melanie Lynskey), Wirt and Greg must travel across this strange land, in hope of finding their way home. At the heart of Over the Garden Wall are two brothers who are looking for direction in different ways. Wirt gets lost in his own thoughts, while Greg gets lost in the wonder and fun of the world around him. Join them as they encounter surprises and obstacles on their journey through the wood.

Over the Garden Wall is based upon McHale’s award-winning short, Tome of the Unknown, which took home the Bruce Corwin Award for Best Animated Short at the 2014 Santa Barbara International Film Festival. Produced under Cartoon Network’s prolific shorts program, Tome of the Unknown joins an illustrious list of animated shorts to become fully produced series on Cartoon Network (Regular Show, Steven Universe, Uncle Grandpa, Clarence, and the recently greenlit We Bare Bears).