Carton Network announces three new series -- ‘Mighty Magiswords,’ ‘The Powerpuff Girls,’ and ‘We Bare Bears’ -- at its 2015-16 Upfront presentation, along with a full slate of returning shows, specials and cross-over events. 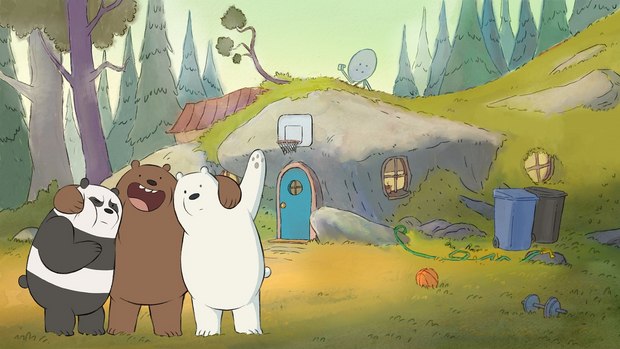 Momentum and growth across all screens are driving Cartoon Network into the 2015-16 Upfront. Powered by number-one shows and breakout new series, Cartoon was the only top kids network to see ratings growth in 2014. The network’s momentum has continued into the new year with double digit growth and moving into 2nd place with kids 6-11.

Original series hits Adventure Time, Clarence, Regular Show, Steven Universe, The Amazing World of Gumball, Teen Titans Go! and Uncle Grandpa, (all returning with additional season/episode orders) are leading the charge, further establishing Cartoon Network’s position as the #1 network with boys 6-11, while also seeing double-digit increases among girls 6-11 through 2014. Additionally, when in premieres, seven out of the top 10 shows among boys 6-11 on all of television were on Cartoon Network.

As the leading choice for the mobile-first generation of plurals, Cartoon Network’s success extends beyond television screens into the digital and mobile space with deeply immersive content that transforms its viewers into fans. Cartoon Network was the #1 most-watched network on FOD across all of cable in 2014, with more than 300 million orders. Cartoon Network Digital also published four #1 apps in the App Store and Google Play last year, with highly-engaging and top-rated mobile and tablet apps like CN Anything helping to expand the definition of programming for Cartoon Network by blending television and digital to create a platform-inclusive experience for fans.

“We are seeing great results with our platform-inclusive strategy to expand the definition of programming across all screens” said Christina Miller, President and General Manager, Cartoon Network-Boomerang-Adult Swim. “Whether in short or long-form there are no walls for how Cartoon Network can be consumed. Digital, mobile and TV have all come together for this new generation of kids, who are very comfortable with the sheer volume of choice; and when you deliver compelling original content and innovative ways of experiencing it, they will find it, engage with it, and share it on every platform.”

For the third consecutive year, Cartoon Network brings its conversations on the road as it embarks on a series of meetings with key clients and promotional partners planned through February/March. Network, ad sales, marketing and programming executives will travel to key cities across the country to present its upcoming programming and digital slate, and discuss strategic partnership opportunities.

This year’s presentation also includes the new look and tone of Boomerang, which began a global re-launch last fall and debuted in the U.S. on January 19 as an ad-supported network.

“Cartoon Network and Boomerang are brands rich with premium content that matters to today’s plurals and create high-impact opportunities for our advertising partners,” said Donna Speciale, president of Turner Broadcasting Ad Sales. “Our kids properties are an essential part of Turner’s larger suite of brands committed to driving results for our clients through meaningful experiences.”

We Bare Bears: We Bare Bears is a comedy about three bear siblings, named Grizzly, Panda and Ice Bear. Each episode follows their awkward attempts at assimilating into human society, whether they're looking for food, trying to make human friends, or scheming to become internet famous. Created by Annie Award-winner Daniel Chong (Toy Story of Terror!), We Bare Bears is produced by Cartoon Network Studios.

The Powerpuff Girls: Slated for a 2016 launch, The Powerpuff Girls reboot will include an all-new television series produced by Cartoon Network Studios and a full licensing program slated to roll out across all regions. One of the network’s most enduring original series, The Powerpuff Girls, which debuted on Cartoon Network in 1998, earned two Emmy Awards, five nominations and countless animation honors throughout its 78-episode run. The Powerpuff Girls centers on three sugar-coated superheroes -- Blossom, Bubbles and Buttercup -- whose mission in life alternates between going to school, fighting crime, winning at hopscotch and saving the world before bedtime. Emmy and BAFTA award winner Nick Jennings (Adventure Time) is on board as executive producer.

Long Live the Royals Mini-Series: Join the royal family as they celebrate the yearly Yule Hare Festival. Parties and feasts will be a plenty as they struggle to balance ruling a kingdom and life as a typical family. A new mini-series from Emmy winner Sean Szeles (Regular Show).

Steven Universe/ Uncle Grandpa Crossover Special “Say Uncle:” Two of your favorite Cartoon Network series, Steven Universe and Uncle Grandpa, are joining forces for a special crossover episode! Watch as a long lost relative of Steven’s comes to town to aid him in unlocking the power of his mother’s gem!

Regular Show: The Movie: From the creators of the hit Cartoon Network series Regular Show, comes a time travelling long-form special. After accidentally creating a “Timenado,” slacker groundskeepers Mordecai and Rigby go back in time and battle an evil volleyball coach in order to save the universe… and their friendship.

Adventure Time Special Mini-Series: In this multi-part series, Finn and Jake face a new threat to Ooo when Princess Bubblegum's experiment unleashes ghosts from Marceline's past.

Total Drama Presents: The Ridonculous Race: In this action-filled, outrageous buddy comedy, 18 pairs of contestants are put to the mental, physical and emotional test in a frantic race around the world. They’ll push themselves and their partners to the limit, but only one team will arrive at the mat first and become the winners of one million dollars!

Transformers: Robots in Disguise: Summoned by Optimus Prime to save Earth from a new Decepticon threat, Bumblebee puts his light-hearted mettle to the test after assembling a rouge team of young Autobot action heroes.

Supernoobs: From creator Scott Fellows (Johnny Test) and DHX Media, Supernoobs chronicles the misadventures of four nerdy friends, who are mistakenly tasked with saving the world from an evil space virus.