Series based on the popular Chinese character Luo Bao Bei will be a co-production between Cloth Cat Animation and the Beijing-based DaYe Transmedia Group’s Magic Mall. 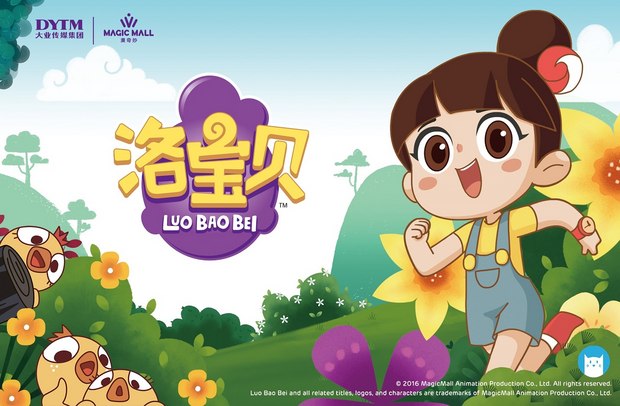 A major Chinese preschool animation series is being produced in Cardiff by the award winning Cloth Cat Animation Studio with support from the Welsh Government.

Cloth Cat’s collaboration with Magic Mall -- part of the Beijing based DaYe Transmedia Group -- will support up to 40 jobs during the 15 month production period and the entire £3.2 million budget will be spent in Wales thanks to £225,000 funding support from the Welsh Government and U.K. Animation tax credits.

It is Cloth Cat’s first Chinese collaboration and the first series that Magic Mall, which specializes in creating children and family entertainment content, will have produced outside of China.

Work is already underway at Cloth Cat’s studio in GloWorks, the Welsh Government’s creative industries and media center in Cardiff Bay, with animation starting this month. The 52 episode series will be produced for Chinese broadcast in June 2017 followed by worldwide distribution on terrestrial broadcast and digital platforms.

“Magic Mall’s decision to select Cloth Cat to produce this new series for the Chinese market speaks volumes about their expertise, while the worldwide distribution of the series will be a superb promotion for Wales as a location of excellence in the highly competitive animation sector,” said Economy Secretary Ken Skates.

“China is the fastest growing media market in the world and this collaboration provides Cloth Cat with a great opportunity to enter the very lucrative Chinese and Asian markets.

“It is great news for Cloth Cat and for the wider animation sector in Wales and I am delighted Welsh Government support helped secure a major international project to Wales that will have a significant spend in Wales.

“Selling content into international markets is an important part of the sector strategy, as is supporting and growing indigenous businesses and I am pleased this project delivers both.”

"We were delighted to be chosen by Magic Mall to bring Luo Bao Bei to new audiences,” said Jon Rennie, MD of Cloth Cat, Wales’ largest animation production company. “With the support of Welsh Government, we have been able to secure a project that will not only enrich the skill base in the Welsh animation industry but also allow Cloth Cat to build a relationship with an exciting Chinese company."

The series will be produced by Jon Rennie, Magic Mall General Manager Grace Tian, the creator of the popular Luo Bao Bei (LLB) character, and executive producer Alex Chien. David Ingham, one of the most sought after children’s writers, also joins the production as Head Writer.

The series is based on the popular Chinese character Luo Bao Bei, created by Magic Mall in 2008. The character is no stranger to children in Beijing in her role as city spokesperson, road safety icon and in popular outreach programs in elementary schools.

Magic Mall wanted an international partner to give the series a Western edge but without losing its Chinese core so that it can appeal in all markets. LLB’s popularity and Cloth Cat’s input ensures the new series will have wide appeal, blending Chinese heritage with a dash of British humor and charm.