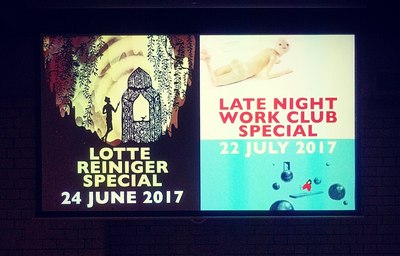 A brand-new animation festival is coming to Cardiff next year. Cardiff Animation Festival will be held at Chapter and other venues across Cardiff on the 20th, 21st and 22nd April 2018.

CAN has run a dedicated animation strand at Cardiff Independent Film Festival for the past two years, which has included screenings of animation from around the world and masterclasses with industry greats Joanna Quinn, Peter Lord (Aardman) and Ben Bocquelet (The Amazing World of Gumball).

International independent animation collective Late Night Work Club released their second collaborative anthology of animated short films, Strangers, late last year. Contributions include Nicolas Menard’s SXSW award-winning “Wednesday with Goddard” and Kirsten Lepore’s viral hit “Hi Stranger.” The event will give audiences the chance to see the animated anthology on the big screen, and will include a masterclass with Late Night Work Club members about online collaboration and how to survive and thrive as an independent animator. The event will celebrate collaboration, with attendees invited to bring along their own personal projects and get involved in a collaborative animation produced the day of.