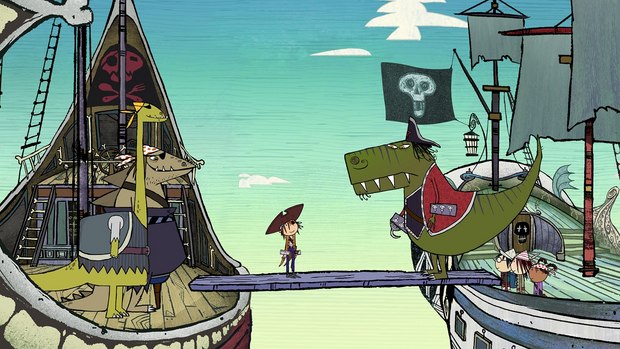 SYDNEY, AUSTRALIA – SLR Productions and international partners Telegael, Super RTL, Network Nine, Top Draw Animation and ZDF Enterprises have confirmed the animated pirate-dinosaur comedy adventure series Captain Flinn and the Pirate Dinosaurs will be broadcast on UK’s POP channel. Premiering on Monday, September 5 the series, based on award winning picture books of the same name, will air daily on POP at 8.30am and 6.30pm.

“I am excited for the UK premiere of Captain Flinn and the Pirate Dinosaurs on POP. The popular kids channel is the perfect home for this piro-dino comedic adventure series as it brings to life the fantastic award winning picture books by Giles Andreae and Russel Ayto. Having launched in Australia on Nine’s GO! the series will soon premiere in other popular territories confirming the global appeal of pirates, dinosaurs and good old fashioned fun,” said Executive Producer and CEO of SLR Productions, Suzanne Ryan.

Packed with pirate talk and swashbuckling fun each episode follows four kids: Flinn, Pearl, Tom and Violet as they set sail on a pirate ship to keep despicable, prehistoric, pirate dinosaur baddies Captain T Rex, Stig the stegosaurus, Dippy the diplodocus, Tricky the triceratops and Terry the pterodactyl from cowardly wrong-doings across the Seven-and-a-half Seas.  These four seafarers boldly go where no young ones have gone before in silly pirate adventures full of magic, singing, curses and superstitions… but only very silly ones.

In 2015 Captain Flinn and The Pirate Dinosaurs won the Gold Pixie Award at the 7th Annual Pixie Awards for its excellent work in the areas of motion graphics, visual effects and animation. The series has also won Best TV Pilot and the prestigious Arlecchino Award for Best Book Based Work, an esteemed accolade of the Cartoons On The Bay Pulcinella Awards, International Television and Cross Media Animation Festival held in Italy.

"Telegael is delighted to partner once again with SLR Productions, Top Draw Animation and ZDF Enterprises to introduce Captain Flinn to children around the world," said Paul Cummins, Executive Producer and CEO of Telegael. "As well as being broadcast in so many international languages, we are especially proud that the series is being broadcast in the Irish language by TG4."