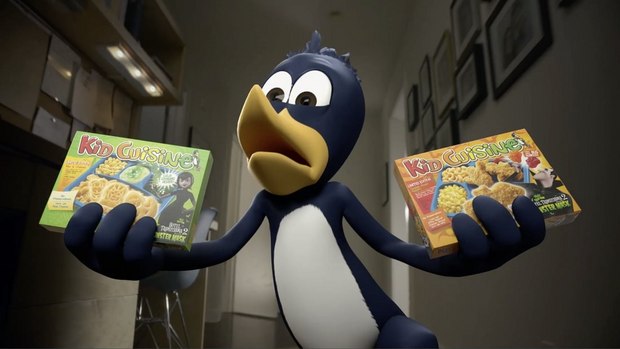 CHICAGO, IL -- K.C. Penguin, the brand icon for KidCuisine kids meals, just can’t seem to get away. That’s the premise behind the new spot “On The Run,” featuring 3D animation by Calabash via agency Nickelodeon Creative Advertising, New York. The new spot, directed by Matt and Jason Docter (aka The Docter Twins) and edited by Glenn Conte of Northern Lights, New York, features a clever tie-in to the new animated feature film starring Adam Sandler, as well as a revamped animated K.C. Penguin character.

“We were excited to work with Nickelodeon Creative Advertising on this well-established brand and character,” commented Sean Henry, Calabash's Executive Producer. “It is always a fun challenge to update an existing character. Our goal was to freshen up K.C.’s look without straying too far from the existing design. It was important that he remain recognizable and retain his personality and attitude.”

“On The Run” opens with a comically terrified K.C. Penguin running down a hall holding a Kid Cuisine meal in each hand and shouting, “they’re coming!” The ‘they’ of course is the cast of Hotel Transylvania 2. Thinking he’s safe behind a closed door, K.C. is immediately confronted by something even scarier, hungry kids who love the character-shaped chicken nuggets and mac n’ cheese found in special Hotel Transylvania 2 Kid Cuisine meals. The spot ends with kids gone and K.C. sneaking up to the table to deliver his new signature line, “Fun tastes goo-oo-oo-oo-ood!.”

“K.C. Penguin is an iconic character, but the creatives wanted to take him to the next level,” Wayne Brejcha, Calabash’s Creative Director notes. “We gave him a more physical appearance and made his faux-hawk haircut look a bit more feathery. Ironically it takes huge effort, thought, experience and long hours to make KC fit in the setting and feel effortless in his animation.”

For Northern Lights editor Glenn Conte the creative challenge was taking all of the various elements (Calabash’s 3D animation, the live action shots and footage from the actual film) and making it all work together seamlessly. A task, he notes, was made easier thanks to Calabash’s understanding of the K.C. character.

“To be able to work with a company like Calabash is great for an editor because they know how take an animated character to a whole other level and fully grasp its essence, its DNA,” Conte says. “Besides the look, they added to his personality in a way that elevated the entire project. A spot like this takes a lot of teamwork, and working with Calabash was a pleasure.”

Henry adds, “Directors Matt and Jason Docter did a terrific job with the live action, capturing dramatic angles and lighting, and a sense of drama while still keeping it light for the intended family audience. Nickelodeon Creative is an agency that understands the animation process innately. They gave us clear communication about their own ideas, but were also open to ideas and approaches from us.”