The long-time Lucky Charms commercial production house magically transforms Lucky the Leprechaun into something much darker in cross-promotion campaign for the new Disney+ series. 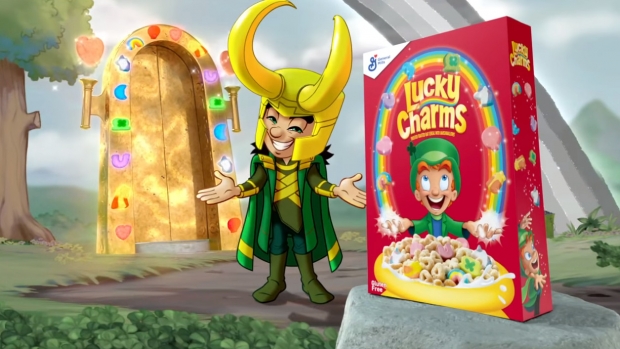 Animation Studio Calabash, Chicago, has shared with AWN their brand-new spot, and dare we say, we’re “Marveling” at how “sweet” it is! Sorry. Sometimes, you just have to take the shot, even knowing you’ll most likely airball.

In celebration of last week’s Disney+’s debut of Loki, Disney and Marvel Studios have teamed up on a magical makeover for “Lucky Charms,” transforming the beloved cereal into a limited-edition “Loki Charms.” Calabash, who has been animating Lucky the Leprechaun for years, handled animation for the commercial, which also debuted last week.

Take a look – even Thor is chuckling:

According to Sean Henry, executive producer at Calabash, Chicago, “The spot begins similarly to past Lucky Charms commercials, but things take a somewhat darker turn when Lucky goes through a portal and comes back as Loki, looks into the camera, and says in a sinister voice, “They’re mischievously delicious."

After lifting the intro from a previous spot, Henry had to figure out how to bring Loki into the story in a way that didn't feel totally random or forced. “The original spot was actually very open-ended and left the viewer with a magical doorway, which was too much of an opportunity for Loki to resist!” Henry notes. “But it definitely took a bit of creative exploration and some good guidance from the Brand to connect it all together.”

“The biggest challenge was probably finding the right balance between Lucky Charms and the MCU's Loki, so that the audience can recognize it instantly and make the connection,” he continues. “Fortunately, we were basing it on an existing spot with a very iconic scene that worked perfectly as an intro and established the branding. Loki's costume is pretty unmistakable, so the remaining question was just how much ‘Lucky’ and how much ‘Loki’ to put into the character animation and visual effects.”

Production tools included Toon Boom Harmony for the 2D animation, Maya and Houdini for the 3D and VFX, and Nuke for compositing.