Calabash Animation Heads to the Office for Lucky Charms

Calabash Animation heads to the office with “Cubicle,” making the point that Lucky Charms are not just for kids.

CHICAGO, IL – Lucky Charms are definitely not just for kids. That’s a point made in a series of recent spots targeting adult consumers of the beloved cereal -- the latest is the 15-second “Cubicle,” created by agency Saatchi & Saatchi, New York and featuring animation from the award-winning studio Calabash Animation.

“Unlike the kid spots, where we have total control of the imagery, the adult-targeted spots are more of a collaborative vision,” Executive Producer Sean Henry says. “When Lucky shows up it is a little different than with the kids, but in some ways even more magical because it is unexpected. Lucky’s performance next to the grown-ups in these chance encounters tends to be a little more understated.”

“Cubicle” opens with a female office worker seated at her desk, rewarding herself with a bowl of Lucky Charms. Suddenly the office begins to shake leading to an explosion of color, cereal bits and paperwork. As the dust settles, we see our office worker, still seated at her desk, only now she’s in a lush, green forest. Lucky the Leprechaun emerges to secure the Lucky Charms and say his trademark “You’re always after me Lucky Charms” line. The spot ends with the worker finishing the tag “they’re magically delicious.”

For Calabash Creative Director Wayne Brejcha, the rainbow explosion and the subsequent transition from the office to the forest -- which uses a blend of practical effect and CG animation -- proved to be a complex challenge.

“It was important that those elements appear to exist in that volume of air, deceptively difficult to do with a complex dimensional live camera movement,” Brejcha says. Our other great creative challenge was to get that elusive spark of life into Lucky so you really buy that he’s interacting with the actress. Our attention to the lighting and color of all these animated bits helped pull off a good, coherent illusion.” 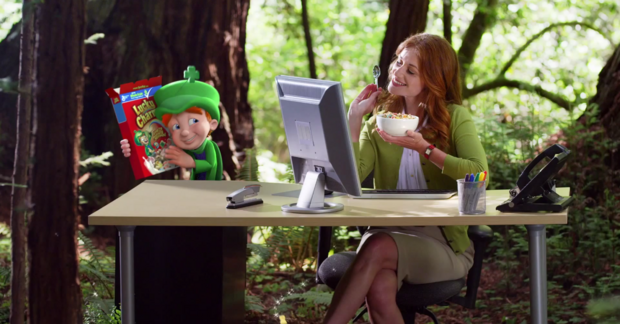