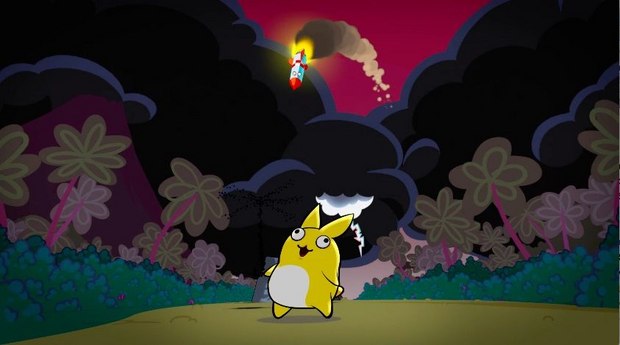 CHICAGO, IL – Calabash was tasked by San Francisco developer, Signal Zero, to “keep little Giblet alive.” This is the concept behind the trailer for Signal Zero’s new mobile game Oops! You Died, featuring a modern retro animation look, and created by Calabash creative studio led by Creative Director Wayne Brejcha and Executive Producer Sean Henry. Keeping little Giblet, the main character in the new mobile game Oops! You Died, alive is a lot harder than it looks, what with all the falling anvils, lightning bolts and even an udderly-confused cows.

“The look of the trailer was inspired by Signal Zero's game design, which was heavily influenced by classic animated shows from the 1980s like Ren and Stimpy,” Brejcha said. “They wanted something that was built solidly on the look of the game, which is well thought out visually. Everything has a meaning and a purpose, from the color of Giblet to the color of the sky. The client wanted to take it to another level, including a 3D camera tracking move through the environment."

The fast-paced trailer features a manically silly Giblet running quickly through a tropical war zone, seemingly oblivious to falling debris that includes anvils, bar bells, safes, pianos, lightning and even a nuclear warhead, before finally being done in by a falling cow.

According to Henry, while the Calabash team strove to capture the spirit of the game, they also imbued it with a more dynamic, cinematic look.

“Our animation team had a blast adapting the flat, graphic, slick-vector look of the game into a more 3D-feeling realm,” Henry noted. “We had to make sure the action was fun and dynamic, but still clearly readable and visually rich. Signal Zero was a joy to work with, giving us solid direction and the freedom to contribute our own nutty ideas. Not surprisingly, in the course of the production I became addicted to another wacky game on my iPhone.”