CAKE, TeamTO & Thuristar Launching ‘My Knight and Me’ at MIPTV 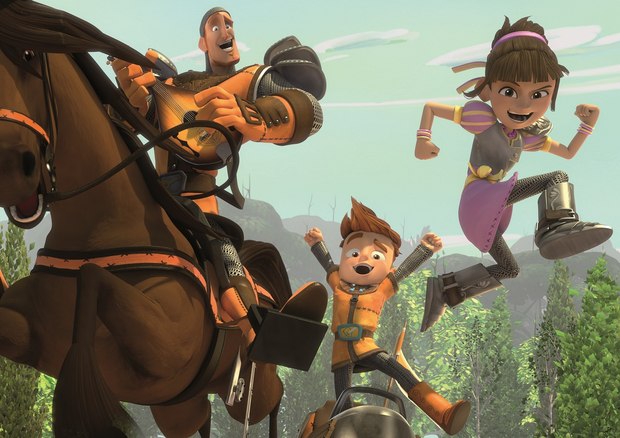 LONDON -- Kids entertainment specialist CAKE, top French CGI studio TeamTO and Belgian creative house Thuristar have announced the launch of their brand new animated series My Knight and Me at MIPTV. A medieval comedy for kids 6-11, My Knight and Me stars loyal, street-smart Jimmy the Squire; his best friend fun, daring Cat the Princess and his father Henri of Orange, a charmingly inept but passionately chivalrous knight who might not be the most efficient protector of the realm but he sure is the funniest! Together, this knightly trio set out to make the Dark Ages a little lighter, a whole lot more fun!

My Knight and Me is the 5th production in CAKE and TeamTO’s partnership; a creative relationship, which has spanned almost a decade and includes worldwide hits Emmy nominated Angelo Rules (now in its third series) and Oscar’s Oasis. Co-produced with Belgian outfit Thuristar, My Knight And Me is a spinoff of Thuristar’s short film 850 meters by Joeri Christiaen, who is directing the series. TeamTO has applied film technology developed at its own studio to the series, resulting in much more detailed and sophisticated cinematic image quality.

Managing Director and CCO, Ed Galton from CAKE commented, “We are delighted to continue our relationship with TeamTO on MY KNIGHT AND ME and are very excited to be introducing what promises to be a fun show with a striking style. With stories of knights, bad dragons, evil witches and emancipated princesses, there is a lot to love and laugh about.”

Thuristar Producer and Partner, Perrine Gauthier said, “My Knight and Me is Thuristar’s first homegrown TV show and we’re thrilled to introduce it with partners who share the same drive for quality as we do. We cannot wait for audiences to discover this fun and lovable trio, unique visuals and catchy soundtrack.”